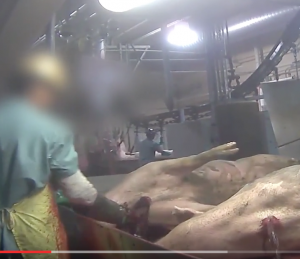 Pigs were allegedly not fully or adequately shocked before slaughtered

AUSTIN, MINNESOTA – An undercover video shot at a pork slaughterhouse in Austin, Minnesota has been turned over to the USDA for a possible investigation into the brutal treatment of pigs at the plant.

A Compassion Over Killing investigator worked inside Quality Pork Processors, a USDA-inspected slaughterhouse in Austin, Minnesota that exclusively supplies to Hormel, the makers of SPAM.

“This shocking footage offers a disturbing, close-up view of the suffering endured by pigs as they are pushed, prodded and dragged to their death,” the group said. 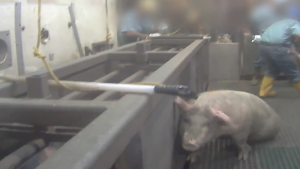 A USDA spokesman who is reported to have seen the video said “The actions depicted in the video under review are completely unacceptable, and if we can verify the video’s authenticity, we will aggressively investigate the case and take appropriate action.”

According to Compassion Over Killing (COK), this facility is one of five in the U.S. operating under a USDA pilot program, known as “HIMP”, that allows for high-speed slaughter and reduced government oversight. That means this facility operates at faster line speeds than almost any other facility in the U.S.: approximately 1,300 pigs are killed each hour, their meat to be sold as SPAM or other Hormel pork products.

COK says its video inside this Hormel supplier documents: