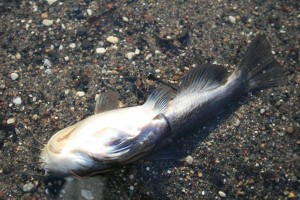 DES MOINES – Monroe Branstad, Governor Terry Brantad’s brother, lost an appeal after killing fish in the Winnebago River with pollutants from his farm.

The Iowa Department of Natural Resources (DNR) was called to investigate a fish kill that occurred in the Winnebago River on or around August 28, 2008. Scott Grummer, a biologist for the DNR, led the investigation into the fish kill. During the investigation, Grummer interviewed Monroe Branstad about the possibility that the fish kill was caused by pollution from his farming operation. According to Grummer, Branstad said he had recently installed a silage leachate runoff basin on his property. Branstad also said that he was the only farmer in the area he knew of who stored silage leachate. The fish kill affected 16.1 miles of the Winnebago River.
As a result of Grummer’s investigation, he determined that the release of sweet corn silage runoff from Branstad’s farming operation caused the fish kill on the Winnebago River. Grummer also performed a fish kill assessment, which led him to calculate that the number of fish killed was 31,244 and that those fish had a monetary value of $63,020.23. As a result of this investigation and fish kill assessment, the DNR prepared a litigation report and made a referral to the attorney general’s office for appropriate enforcement action.

On May 11, 2010, Branstad entered into a consent order with the State. As part of this consent order, Branstad admitted that on August 28 and 29, 2008, sweet corn silage leachate, a pollutant, discharged from a containment basin on his farm operation into the Winnebago River in violation of Iowa Code. However, Branstad denied the discharge caused the death of fish in the Winnebago River and specifically reserved his right to contest any claim for damages brought by the DNR for the fish kill. Branstad agreed to pay a civil penalty of $10,205 and an administrative penalty of $6,795 for the violations.

Following the investigation, the final amount in the restitution assessment given to Branstad was $61,797.49.

The Supreme Court ruled this week that Monroe Branstad would get no reimbursement for attorney’s fees.