This news story was published on July 31, 2015.
Advertise on NIT • Subscribe to NIT 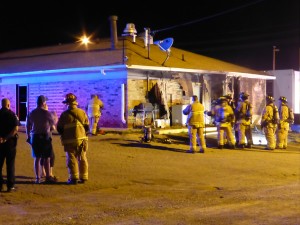 Owner Dana Despenas (left, with ball cap on) is clued into the situation by police and firefighters

MASON CITY – A fire was reported at Homer’s Bar on Mason City’s south side after midnight, causing serious damage to the structure.

Emergency responders including police and firefighters were called to Homer’s Bar, 1911 South Federal Avenue, after midnight Friday morning. Fire Chief Bob Platts told NIT that persons driving by the bar had called to report a fire and heavy smoke seeping out of the building.

At the scene, a large amount of damage was at the east end of the building near the kitchen area. The outer wall and roof was charred from fire. Smoke was still coming out and firefighters were inside and out dousing the building. By about 1 AM, the smoke had stopped and firefighters were clearing rubble and debris and using flashlights to look for more hot spots and smoke.

Owner Dana Despenas arrived on the scene and Chief Platts and other firefighters explained the situation. He went inside the building to look around once it appeared to be safe to do so.

No one was hurt, and the bar appeared to be closed when the fire began. The state fire marshall was expected on the scene at some point to conduct an investigation.

UPDATE FROM MCFD, FRIDAY: Fire Fighter located the fire in the shed attached to the back of the building. Fire damage was limited to the shed. A positive pressure fan was placed at the door to the main building to help with smoke removal. There was minor smoke damage to the inside of the main building. Salvage and overhaul was performed on the main building looking for fire extensions and none were found.