CHARLES CITY – A woman and a teen were arrested for shoplifting in Charles City.

On July 11, at about 1:27 PM, Charles City police arrested 24-year-old Sherry Ritter of Charles City for shoplifting from a store in the 700 block if Hulin Street. The items were valued at $27.93, and she was charged with 5th degree theft. Also, a 14-year-old juvenile was referred to juvenile court services for shoplifting items valued at $10,70. She was also charged with 5th degree theft.

Ritter will appear in court for trial on August 28. 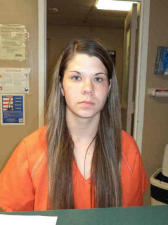