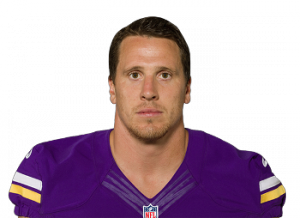 EDEN PRAIRIE, MN – Vikings LB Chad Greenway has been named the winner of the Byron “Whizzer” White Award presented by the National Football League’s Players Association, the highest honor awarded by the NFLPA. The annual award honors players who go above and beyond to perform community service in their team’s cities and hometowns.

“I am extremely honored to receive the Whizzer White Award from the Players Association. I know how much Mr. White meant to this country outside of his work on the football field and I am humbled to win this prestigious award in his honor,” Greenway said. “As a player in the nation’s most popular sport, we have an opportunity to use our platform to give back to those in need. I consider myself very fortunate to have the chance to give back to my local community through my Lead The Way Foundation and have always let it be known that my off-field endeavors are equally as important as my on-field honors. Winning this award is truly an honor and something that I will cherish long after my playing days are over.”

“I cannot think of a more deserving player to win this award than Chad Greenway,” said Vikings Owner/President Mark Wilf. “Since being drafted in 2006, Chad has represented the Vikings with class both on the field and in the community. His commitment to philanthropy embodies what this organization stands for, and we are proud to call him a Viking.”

Greenway, who was selected as the Minnesota Vikings Community Man of the Year for the second time in 2014, joins Cris Carter (1999) as only the second Viking to win the award since it was established in 1967. In addition to winning this award, Greenway was also a finalist for the inaugural Art Rooney Sportsmanship Award that was announced at the NFL Honors program in January.

During the season, each team nominated one of their players. A panel of three former players – Charlie Batch, Mike Kenn and Kevin Mawae – narrowed the 32 candidates down to five finalists before a final decision was made.

This award was established to honor Byron Raymond “Whizzer” White, a former first-round pick and 31-year Supreme Court Justice. White – a scholar, athlete, patriot, humanitarian and public servant – played three seasons in the NFL with the Pittsburgh Pirates and Detroit Lions before enlisting in the United States Navy during World War II.