Singleton on Most Improved Team; Washpun, Buss to All-Bench Squad 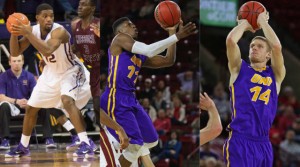 UNI is 32-6 with Singleton (Minneapolis, Minn./Hopkins HS) in the starting lineup over the last two seasons. He ranks second on the team in rebounding (5.1 rpg). Singleton has tallied a team-best 64 offensive rebounds. He has recorded 19 multi-offensive rebound games. Singleton buried his first three-pointer of the season at Illinois State in the closing minutes to give UNI a 49-48 lead and cap a 12-point second-half comeback (Jan. 25). He averaged 2.3 ppg and 2.5 rpg as a junior – and has improved those numbers to 4.9 ppg and 5.1 rpg this season. Singleton scored a career-high 15 points in UNI’s 79-77 overtime win at Stephen F. Austin (Nov. 18).

Buss (Charles City, Iowa/Charles City HS) ranks fourth on the team in scoring at 6.6 points per game. He ranks third on the team with 31 3-pointers made. Buss is shooting 38.8 percent from three-point range. He is the 97th player in school history to score 500 or more points (586 career points). He has scored in double figures on 11 occasions off the bench this season. Buss has been UNI’s top bench-scorer nine times this season.

Washpun (Cedar Rapids, Iowa/C.R. Washington HS/Univ. of Tennessee) was named the captain of the MVC’s All-Bench Team. Washpun ranks second on the team in scoring (8.2 ppg), assists (2.8 apg) and blocks (0.6 bpg). He leads the team lead in steals (1.1 spg). Washpun has led the team in scoring off the bench 12 times this season. He has posted 12 double-figure scoring games off the bench. Washpun notched a career-high 27 points to go along with five rebounds and four steals at VCU (Dec. 13). Washpun was named to the Cancun Challenge All-Tournament team after wins over Virginia Tech and Northwestern.