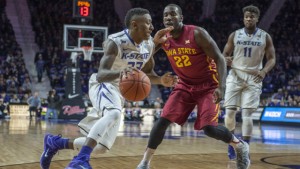 Iowa State came out firing, drilling eight 3-point field goals in the first 20 minutes and building a game-high lead of 14 points (35-21) in the early going.

Monté Morris was Iowa State’s top contributor on the afternoon. The Flint, Mich. native tallied five boards, three assists and three steals to go along with his 15 points.

Georges Niang also turned in an impressive performance for the Cyclones today, scoring 21 points, grabbing four rebounds and dishing out two assists. 5-7 shooting from beyond the arc backed the junior’s scoring. His five made three-pointers is a new career high.

Iowa State took a 40-33 advantage into the half, following a Matt Thomas corner three. The Cyclones got out to an early lead, which was sprung by a 10-2 run in the first five minutes of the game.

Kansas State would claw back, taking a 12-10 lead after a 10-0 run, culminating with a Stephen Hurt three-point-play at the 12:11 mark. The Wildcats would not lead again until the waning seconds of the game.

Iowa State’s three-point shooting was the big story of the first half. The Cyclones were 8-15 from downtown before the intermission. Naz Long was 3-4, while Niang connected on 4-5 attempts from three in the first half.

The second half began just like the first ended. Even though the Cardinal and Gold cooled off from downtown, only hitting on 3-12 in the second half, the Cyclones continued to build their lead, growing it to as large as 12 at the 10:48 mark.

Just before the under-eight minute timeout, the Wildcats began their comeback. In the final eight minutes of the game, KSU went on a 20-9 run, in which the Cyclones went three and a half minutes without scoring a point. Kansas State’s run was punctuated by a Wesley Iwundu dunk with 18 seconds on the clock.

Monté Morris’ 15 points and three assists were big for the Cyclones today. The sophomore was also busy on the defensive end, snagging three steals, which makes him 20th all time on Iowa State career steals list.

Iowa State returns home on Monday night, where they will host the Oklahoma Sooners at 8 p.m. for Senior Night.