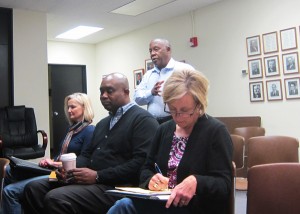 MASON CITY – NIT reported 10 days ago that the city had completed negotiations with Lionel Foster in his lawsuit that alleged age and race discrimination as well as retaliation. The payout on that lawsuit will be $240,000, it was revealed today.

Those negotiations were completed earlier this month in Des Moines.  The city’s insurance company signed off on the deal after city officials relented and agreed to settle rather than face a humiliating ordeal in court where much dirty laundry may well have been aired.

City officials have refused to comment to NIT about the settlement despite a number of attempts to reach them.

Lionel Foster did tell NIT that he never wanted to stop working and his since completed a college degree course at Kaplan University.  He is now seeking employment, and says has a number of options.