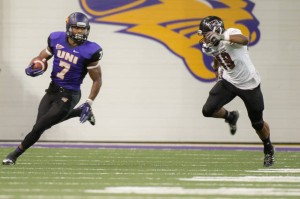 UNI’s four All-America selections are among 18 from the Missouri Valley Football Conference, the most of any conference in the FCS. North Dakota State and UNI finished first and second for most selections among all FCS schools, six and four, respectively.

Johnson is the 17th player in UNI history to receive first-team honors from The Sports Network, including recent honorees Tyler Sievertsen (2013) and Ben Boothby (2011). Johnson’s first-team selection is his third of the season, also being named to the AP All-America and Beyond Sports Network All-America teams.

The Clinton, Iowa native finished third in the FCS in all-purpose yards and first in the MVFC. He notched a school record 2,527 all-purpose yards, including six games where he had 200 or more. He racked up 1,553 rushing yards, 536 receiving yards and 438 kickoff return yards, including a 98-yard return for a touchdown against Illinois State, breaking 15 school records along the way.

Rummells, a West Branch, Iowa native, started on the offensive line for four years. He was an integral part to helping UNI to 2,353 yards on the ground that included 28 rushing scores, ranking sixth all-time at UNI. The team captain was an anchor for the line, helping the Panther offense to finish first in the MVFC and the FCS in redzone offense.

Rounding out UNI’s Sports Network All-America selections is Williams, who started all 14 games this season on the defensive line. He helped UNI’s defense to a No. 2 ranking in the FCS in team sacks, finishing with 8.0 himself. He racked up 93 tackles, including 14.0 tackles for loss to rank himself fifth all-time at UNI in career TFL.