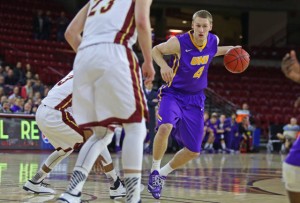 Jesperson (Merrill, Wis./Merrill HS/Univ. of Virginia) scored a team-high 10 points off the bench in leading UNI to a 56-44 win over the Iowa Hawkeyes on Saturday at the Big Four Classic in Des Moines.

He buried three 3-pointers against the Hawkeyes, including one with just over a minute to go in the first half that snapped a nearly five-minute scoring drought for the Panthers. Jesperson’s final 3-pointer of the game allowed UNI to extend a six-point lead to 45-36 with 7:03 left in the game. Iowa would get no closer than six points after Jesperson’s 3-pointer.

Jesperson and the rest of the UNI bench outscored Iowa’s bench, 28-12.

The No. 23/24-ranked UNI men’s basketball team will be in action again on Sun., Dec. 28, at 2 p.m. in the McLeod Center against the South Dakota State Jackrabbits.