On the evening of December 18, Charles City police were called to a business in the 1400 block of South Grand Avenue for a report of a shoplifter. When officers arrived, a male subject was placed under arrest. Dustin Dunford, age 30 of Greene, was wanted on a warrant out of Butler county for felony theft in the second degree and also out of Bremer county for driving while revoked.

Dunford was jailed and soon released after posting $750 bond. He is set for a court appearance on January 6. 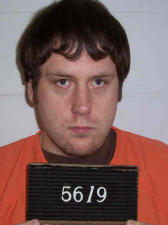