Swanson is being held in the county jail on $3,300 bond at this time. 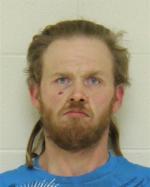