According to online records from the Ames police department, 21-year-old defensive lineman Devlyn Cousin was arrested at 11:43 PM at his apartment on Cove Drive after a report of a domestic situation there. Cousin was charged with domestic assault and obstruction of emergency communication and taken to jail. He was released later Saturday.

The Des Moines Register reported that head coach Paul Rhoads has placed Cousin on indefinite suspension while the charges are sorted out. 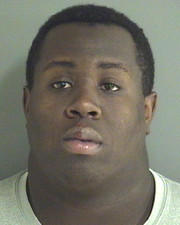