BUCHANAN COUNTY – An Iowa sex offender is behind bars after law enforcement accused him of victimizing a 14-year-old child.

On Thursday, December 11, 2014, Buchanan County Sheriff’s Deputies arrested Michael Wesley Toms, 24, of Rowley. He was arrested at the 800 block of Third Street NW in Independence.

Toms was charged with second offense Sexual Abuse in the Third Degree (class C felony) and Failure to Comply with Iowa Sex Offender Registry (class C felony). This arrest was the result of an investigation that began in October in which Toms was alleged to have committed a sex act with a person that was fourteen years of age. Toms also was alleged to have withheld information when updating his Sex Offender Registry information with the Buchanan County Sheriff’s Office. 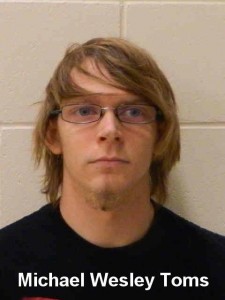