CHARLES CITY – An Illinois man was stopped by Charles City police, arrested, and later charged with a felony.

On December 10 at about 12:40 AM, Charles City police conducted a traffic stop of a vehicle near the 500 block of North Grand Avenue. After an investigation, police arrested 25-year-old Jerry Glover of Illinois. He was charged with no insurance and possession of drug paraphernalia. He was later charged with felony conspiracy to commit a felony.

Glover was released from jail and awaits a hearing on December 12. 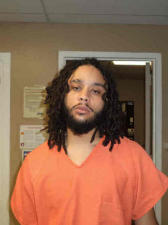