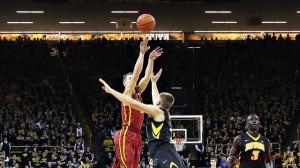 IOWA CITY – Iowa State was without one of its best players Friday night when it took the court in Iowa City to face the Hawkeyes but it didn’t matter, as the ‘Clones rode a 26-2 second-half run to blow out the Hawks.

ISU played without second-leading scorer Bryce Dejean-Jones, who was suspended for Friday’s game due to a violation of team rules after police were called to his apartment for a loud party earlier in the week. The Cyclones didn’t seem to need him, though, as they led or were tied for all but 49 seconds en route to a 90-75 win, the largest margin of victory for the Cyclones in Iowa City.

Iowa State blitzed the Hawkeyes with a 26-2 run after Iowa had tied it at 33 late in the first half. Matt Thomas’ only points of the game came on a three at the buzzer to send ISU into the lockerroom up by five.

“I thought that was a big play in the game,” Iowa coach Fran McCaffery said. “We had a chance to tie it up, go up one, we’re down five. Thomas makes a big shot, got to give credit there.”

ISU extended its lead by making 10-of-its-first-11 field goals in the second half and blew the game open. Iowa tried to stay in the game but was outmatched by the skill and athleticism of the Cyclones.

The Hawkeys return to action Dec. 20 when it faces Northern Iowa in the Hy-Vee Big Four Classic in Des Moines. No. 14 Iowa State (7-1) returns home Sunday, December 14 for its final on-court test prior to Finals Week. The Cyclones will host Southern at 5 PM. Fred Hoiberg will be seeking his 98th win as Iowa State’s head coach. He’s just three wins from becoming the fifth coach in school history with 100 wins.