Wal-Mart shoplifter gets away from cops, loss prevention 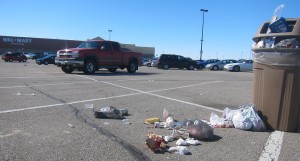 MASON CITY – Police were called to the Mason City Wal-Mart Friday evening when three alleged shoplifters were detained and another fled the store and got away.

Wal-Mart employees called police at about 6:30 PM Friday night to alert them that they had three alleged shoplifters detained and another ran from the store and was hiding nearby in the Petco parking lot, crouched behind a white car.

Mason City police responded, as did Cerro Gordo deputies. As police questioned the three detained persons in the store, law enforcement and Wal-Mart loss prevention employees conducted what amounted to a manhunt in the adjacent parking lots, corn fields, streets and ditches for the fleeing theft suspect.

It was reported that the white male subject was in a wooded area, then in a corn field, and later in a ditch along Highway 122. A person who was in the Best Buy parking lot Friday evening told NIT that “they were really looking for someone, and they wouldn’t give up.”

It was not known what they four individuals tried to steal. In the end, no arrests appeared to have been made. The man who fled was not caught.

One Response to Wal-Mart shoplifter gets away from cops, loss prevention