CLEAR LAKE – A Des Moines man remains jailed as he awaits a trial on a felony charge of willful injury.

Jose Louis Ramos, age 28, plead not guilty on September 29 to a felony charge of willful injury, and a jury trial was set for December 2. He remains jailed on $10,000 bond.

Cerro Gordo deputies assisted Clear Lake police after an assault was reported on the afternoon of September 18. Officers searched an area near Second Avenue South and the public works buildings east to 12th Avenue South for a Hispanic male suspect believed to be involved in the incident. During the course of the search, officers located Ramos near 2101 12th Avenue South and placed him under arrest. 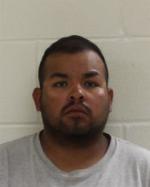