This news story was published on September 18, 2014.
Advertise on NIT • Subscribe to NIT 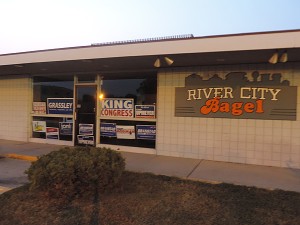 MASON CITY – Cerro Gordo County Republicans announced yesterday that they were changing the name of the county’s party headquarters office to honor a former chairwoman.

According to current GOP County Chairwoman Barb Hovland, De Byerly “was instrumental in making Iowa a ‘RED’ state for the first time in 2 decades from her work as the State Organization Coordination in 2003 of the Bush/Cheney ’04 campaign.

“I have known the Byerly family since I was a child,” Hovland continued. “I grew up just a few blocks away from De and her family. As a child, I would frequent the family’s business, Earl’s Fruit Market on Federal Avenue. For me, as the current CGC GOP CoChair, to unveil the dedication to De yesterday meant so much to me.” 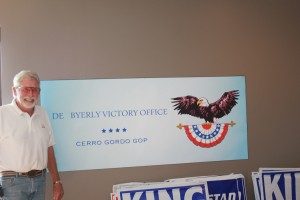