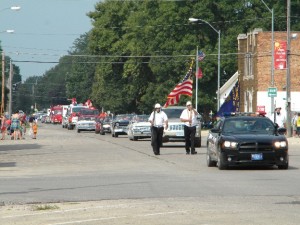 SHEFFIELD – The Sheffield city council has gone patriotic, and agreed earlier this month that the Pledge of Allegiance will be recited at every city council meeting.

Joining other area towns like Hampton, Sheffield city leaders will begin each council meeting with the Pledge of Allegiance, it was decided at the August 11 council meeting. Some towns, like Clear Lake and Mason City, do not take time for the pledge.

In other business, the council announced that nearly enough funds have been raised for repairs to the city pool.  The cost has been estimated at $363,000, with $300,000 already raised.  As funds are still being raised, the council agreed that the city would pay the remaining balance if necessary.

In addition, Sheffield police are looking at adding taser guns to the department.  Costs of the weapons were given to the council for deliberation.