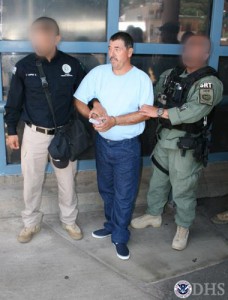 NOGALES, Ariz. — A Mexican man wanted for triple homicide in his native country was turned over to Mexican law enforcement authorities at the Nogales port of entry Monday, following a joint enforcement effort by Department of Homeland Security (DHS) agencies working under the auspices of the Alliance to Combat Transnational Threats’ (ACTT) Mexican Fugitive Removal Program.

Alberto Lira-Quintero, aka Lamberto Armenta Rivera, 48, was turned over to Mexican authorities by officers with U.S. Immigration and Customs Enforcement’s (ICE) Enforcement and Removal Operations (ERO). He is the subject of a criminal arrest warrant issued in September 2010 by Mexican law enforcement authorities in the Mexican state of Sinaloa, charging him with triple homicide. Lira-Quintero is the 250th foreign criminal fugitive arrested by ERO nationwide this fiscal year, putting the agency on pace to exceed last year’s record total of 255 arrests. Since Oct. 1, 2009, ERO has removed more than 720 foreign fugitives from the U.S. who were being sought in their native countries for serious crimes, including kidnapping, rape and murder.

“This man not only thought he could elude justice in Mexico by hiding in Arizona, but also has a history of criminal offenses in the U.S.” said Jon Gurule, field office director for ERO Phoenix. “Thanks to the work of our dedicated agents assigned to the criminal alien program and our close partnerships with U.S. Border Patrol and the Government of Mexico, this triple homicide suspect was identified, and returned directly into the hands of Mexican law enforcement to face justice for his alleged crimes.”

ERO agents assigned to the Alhambra state prison facility in Phoenix encountered Lira-Quintero in December 2009 after he was booked in following a conviction for kidnapping in Maricopa County Superior Court. At that time, ERO agents placed an immigration detainer on his case and served him with a notice of intent to reinstate a prior removal order. ERO took custody of Lira-Quintero July 27, 2014, after he completed his criminal sentence, and transferred him to Eloy Detention Center, where he was held pending his removal.

Lira-Quintero had been previously convicted in the U.S. of attempted transportation of marijuana for sale in February 2004, and was subsequently removed to Mexico in November 2005 after completing his state prison sentence.

Tucson Sector Border Patrol is closing information gaps, increasing the likelihood that Mexican fugitives are brought to justice in Mexico, and increasing knowledge of potential threats along the international border. With the cooperation of Mexican authorities, Border Patrol agents are quickly able to determine dangerous individuals looking to enter into the United States.