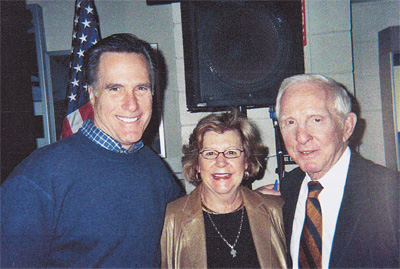 $50 gets you on board: For Five Grand, you can co-Host; Longtime GOP funder Blodgett assembles Iowa’s “A-Team” for the Governor –

CLEAR LAKE – Dr. Gary Blodgett and his wife, Sandy, will host Gov. Terry Branstad on ‘The Lady of the Lake’ passenger boat, to raise money for the Branstad/Reynolds re-election campaign. The two-hour event will take place on Friday, July 18th, from 5 pm to 7 pm, in Clear Lake. The Blodgetts have brought together what truly appears to be Iowa’s ‘A-List’ of the Republican Establishment, a veritable ‘Who’s Who’ of the Iowa Republican Party financial backers, including prominent GOP supporters from north Iowa, Des Moines, and even Lake Okoboji.

Co-hosting the event will be 6-term Des Moines city Council member Christine Hensley and her husband, Steven. The Hensleys own a summer home on Clear Lake, where the Blodgetts have owned property for nearly 45 years. According to the invitation (shown here), each of the 39 ‘co-hosts’ and ‘Sponsors’ paid between $1,000 and $5,000 to participate in the event, but the “requested contribution” amount is only $50. Gary Blodgett is a retired Mason City orthodontist and businessman who represented Cerro Gordo county in the Iowa Legislature from 1992-2001, where he served as Deputy Majority Leader.

Since the mid-1970s, Dr. Blodgett has been one of Iowa’s top Republican fundraisers, beginning with his efforts on behalf of President Gerald R. Ford’s 1976 campaign. President George W. Bush appointed Blodgett in 2001 to the position of Federal administrative Judge, in which Blodgett served until 2008, in Washington, D.C. Dr. Blodgett adjudicated legal cases relating to health care law, under the jurisdiction of the U. S. Department of Health and Human Services. 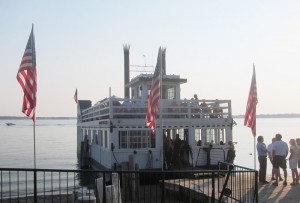 ‘The Lady of the Lake’ is a paddle wheel steamboat that’s been cruising on Clear Lake since 1987. The ship’s capacity is 150 passengers, and among its amenities are a dance floor, two restrooms, a fully stocked bar, an open-air upper level, a stage and sound system, and what the vessel’s website says are “the services of North Iowa’s finest caterers” for on-board functions.

Christine Hensley was first elected to the Des Moines City Council in 1994, and is now serving her sixth term. She and her husband are primarily summer residents of Clear Lake. Lining up substantial sums of campaign cash is nothing new for Gary Blodgett, who has also raised funds for U. S. Senator Charles Grassley, Congressmen Steve King and Tom Latham, and former Congressmen Jim Nussle, Fred Grandy, and candidates for the Iowa Legislature, and various county-level offices in north Iowa. When contacted by NorthIowaToday.com, Gary Blodgett said he hopes to “raise as much money for Terry Branstad and [Lt. Gov.] Kim Reynolds as we can. In politics”, Blodgett said, “campaign cash is an excellent barometer of support, and Iowans are solidly behind Terry Branstad.”

An NIT subscriber who was invited to the Blodgett’s reception/cruise with Governor Branstad
provided her invitation to NIT, which is reprinted here: