Honeybee demonstration hive up and running at Lime Creek 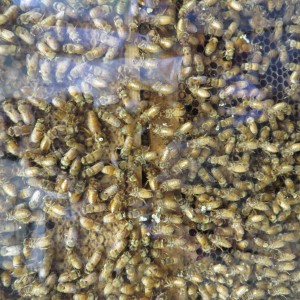 The unique honeybee demonstration hive at Lime Creek Nature Center allows visitors to view the bees through glass. The queen is marked with a white dot (middle left).

We are excited to announce that we have our honeybees back! Here at Lime Creek we have had a bee colony since we first opened in 1984. The late Leo Stattleman was the original bee keeper for Lime Creek who built the display and maintained the bees. Our current volunteer beekeeper is Tim Huey and our bees this year were provided by beekeeper Pat Ennis. We appreciate their efforts in caring for our beloved bees.

Did you know that beekeeping dates back at least 4500 years ago? Now, there are half as many beekeepers as there were 25 years ago and the number of hives has decreased by one third.

Bees can forage 2-5 miles from the hive in search of pollen. To make a single pound of honey, bees may need to fly 50,000 miles. A single honey bee only collects about 1/12 of a teaspoon in their lifetime. Honeybees are the only insect that produces a food that is eaten by man. In fact, raw honey is the only food that contains all of the substances required for life, including enzymes, minerals, vitamins, and water.
At first the bee colony here at Lime Creek thrived and stayed here all year long. 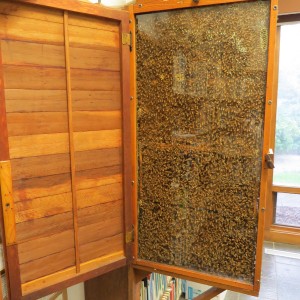 The unique honeybee demonstration hive at Lime Creek Nature Center allows visitors to view the bees through glass. The bees can exit through a hose at the top that allows them access to the outdoors and nectar sources.

But in the recent years, the bees began having troubles; same with other colonies around the world. Our bees began thinning out more in the winter and this past year the entire colony died off. So, the hive had to be taken and rejuvenated with a new set of bees. But, the bees are back and better than ever.

So, what’s the bee’s problem? The problem arose in the fall of 2006 when beekeepers around the country reported major losses in their hives. Bees simply flew away and never came back. This mysterious killer has been called Colony Collapse Disorder or CCD. Although it has been 8 years since CCD emerged, bees are still fighting for their lives and losses are still being reported.

A major contribution to the decline is thought to be pesticide use. Neonicotinoids are a variety of pesticides that have been shown to have adverse effects on bees. These pesticides weaken the bee’s immune system which makes them more susceptible to diseases and parasites. One study showed that this class of chemicals can fog the bee’s brain and alter their behavior. Neonicotinoids are used routinely in the US on wheat, corn, soy, and cotton crops.

Another reason for colony decline is the loss of foraging habitat. Without wide open areas with varieties of pollen producing flowers, bees can’t collect enough pollen or nectar to sustain their hive. Their foraging habitat has been either developed into urban areas or cultivated into cropland.

Because so much of their habitat has been taken for cropland, bee culture has adapted to work with these cropping systems. Bee colonies are trucked from place to place where their pollinating services are needed. But, this is comparative to binge eating disorders. The bees will gorge themselves for a few days at a farm and then not eat for weeks while they are being trucked to the next farm. Crops such as apples, nuts, blueberries, strawberries, alfalfa, and guar bean all use pollinators such as bees to keep their business alive. In total, bees contribute more than $15 billion to US crop production. It is even estimated that one out of every three bites of food rely on bees.

Although there is no one cause of Colony Collapse Disorder, most scientists agree that it is likely a combination of many factors. These could include chemical exposure, lack of proper environment, and diseases. No matter the cause, we should all BEE conscious about how we treat our environment, because it’s not just us that rely on it.

Stop out at Lime Creek Nature Center to learn more about bees and observe a real, working hive in action. The hive is located in the library inside the center. Be sure to check out the display board next to the hive to learn all about the three types of bees in a hive; drones, workers, and the queen. For a challenge, search the display for the queen bee. She will be bigger than the others and is marked with a white dot on her back. Good luck and see you soon!