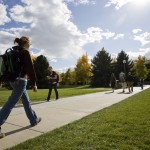 The bill would reduce to a single postcard—called the “Student Aid Short Form”—the questions any student must answer to apply for federal financial aid and inform high school students in their junior year of the amount they’ll receive in federal aid to help pay for college. It would also address the problem of some students borrowing too much money, and simplify the options students have to repay their federal loans. The act also streamlines federal grant and loan programs to better serve more students more effectively.

Alexander said: “Every year, 20 million students waste millions of hours and countless dollars on a 100-question application form that only needs to be the size of a postcard. This bill would cut more than 100 questions down to two, and help families get aid information sooner, while protecting taxpayers from lending more money to students than they’re able to repay.”

Bennet said: “While other countries are promoting access to higher education, we are making it harder and harder for people to attain a degree. This bill will simplify the entire financial aid process to promote more access and success. Under a simplified system we can expect more students will enroll and stay in school.”

The senators said that they want to be certain that the short form sends taxpayer dollars solely to those eligible, and so would reduce the form to as close to two questions as possible without creating an opportunity for fraud or abuse.

The Financial Aid Simplification and Transparency Act, or FAST Act, would transform the federal financial aid process by accomplishing the following: