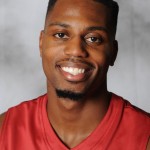 AMES – Iowa State All-American men’s basketball player Melvin Ejim’s season started with a bang, scoring 22 points in 28 minutes in an upset win over No. 7 Michigan in November. His career was punctuated today when he was named ISU’s Male Athlete of the Year for 2013-14.

Ejim, an All-American by five organizations, was the Big 12’s Player and Scholar-Athlete of the Year after helping the Cyclones to a 28-8 record, a Big 12 Tournament championship and an appearance in the Sweet 16.

His accomplishments on the court make him the first men’s basketball player to earn the award since Jake Sullivan shared it with wrestling’s Zach Roberson in 2004.

Ejim missed the first two games of the season after suffering a hyperextended knee in practice. He returned for Iowa State’s highly-anticipated, nationally-televised showdown with the Wolverines. The Toronto, Ontario native entered the game to a standing ovation with 16:17 left in the first half. The rest is history.

Ejim tallied 20 or more points in 13 games, with his season being highlighted by a 48-point, 18-rebound effort against TCU. His 48 points were a Big 12 single-game record. Ejim was 20-of-24 from the field in the game, tying or breaking nine Big 12 records against the Horned Frogs.

It was a performance for the ages. So was his entire season.