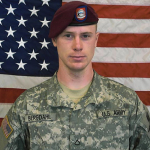 The secretary assured the committee that he would not sign off on any decision that wasn’t in the best interests of the United States.

“The prisoner exchange was done legally, with substantial mitigation of risk and in the national interest of our country,” Hagel said.

Since his disappearance in 2009, Bergdahl was officially listed as missing-captured. “No charges were ever brought against him, and there are no charges pending now,” Hagel said, noting that all aspects of government worked to recover the sergeant.

“We never stopped trying to get him back, as the Congress knows, because he is a soldier in the United States Army,” the secretary said.

Any questions about the sergeant’s capture are separate from these facts, Hagel said, “because we do whatever it takes to recover any U.S. service member held in captivity. This pledge is woven into the fabric of our nation and its military.”

In 2011, the Obama administration conducted talks with the Taliban on a detainee exchange involving the five Taliban detainees who ultimately were transferred after the release of Bergdahl. Congress knew of these talks and knew the Taliban broke off these discussions in March 2012, the secretary said. “We have not had direct talks with the Taliban since this time,” he added.

In September 2013, the Qatari government offered to serve as an intermediary with the Taliban, Hagel said, and the United States requested a proof-of-life video of the sergeant.

“In January, we received that video, and it was disturbing,” the secretary said. “It showed a deterioration in his physical appearance and mental state compared to previous videos. The intelligence community carefully analyzed it and concluded that Sergeant Bergdahl’s health was poor, and possibly declining.”

Acting on the exchange therefore became more urgent, he said.

On May 12, the United States and Qatar signed a memorandum of understanding detailing the specific security measures that would be undertaken and enforced by Qatar if any Taliban detainees were transferred to their custody, Hagel told the House panel. These include risk mitigation measures and Qatar’s commitments to travel restrictions, monitoring, information sharing, limitations on activities and more, he said.

Soon after the memo was signed, the secretary continued, Qatari intermediaries said that time was not an ally. “This indicated that the risks to Sergeant Bergdahl’s safety were growing,” Hagel said. “We moved forward with indirect negotiations on how to carry out the exchange of five detainees, and agreed to the mechanics of the exchange on the morning of May 27, following three days of intensive talks.”

Also on May 27, President Barack Obama received a personal commitment from Qatari Amir Tamim bin Hamid al Thani to uphold and enforce the security arrangements. The final decision was made to move forward with the exchange, Hagel said. With recovery imminent, U.S. officials were concerned that any delay, or any leaks, could derail the deal and further endanger Bergdahl, he told the panel.

“We were told by the Qataris that a leak would end the negotiations for Bergdahl’s release,” Hagel said. “We also knew that he would be extremely vulnerable during any movement, and our military personnel conducting the handoff would be exposed to a possible ambush or other deadly scenarios in very dangerous territory. And we had been given no information on where the handoff would occur.”
This was why the military moved “quickly, efficiently, and quietly,” Hagel said. “We believed this exchange was our last, best opportunity to free him.”

After the exchange was set in motion, Hagel said, only 96 hours passed before Bergdahl was in American hands. Uncertainty ruled, he acknowledged.

“We did not know the general area of the handoff until 24 hours before,” Hagel said. “We did not know the precise location until one hour before. And we did not know until the moment Sergeant Bergdahl was handed over safely to U.S. special operations forces that the Taliban would hold up their end of the deal. So it wasn’t until we recovered Bergdahl on May 31 that we moved ahead with the transfer of the five Guantanamo detainees.”

Hagel called Obama’s decision to move forward with the transfer of these detainees a tough call. “But I support it and stand by it,” he added.

The five Afghan Taliban members exchanged for Bergdahl are enemy belligerents and were held in the facility at Guantanamo Bay, Cuba. “They have not been implicated in any attacks against the United States, and we had no basis to prosecute them in a federal court or military commission,” Hagel said. “It was appropriate to consider them for an exchange. And if any of these detainees ever try to rejoin the fight, they would be doing so at their own peril.

“The secretary of state, the attorney general, the secretary of homeland security, the director of national intelligence, and the chairman of the Joint Chiefs of Staff all supported this transfer,” the secretary continued. “There was complete unanimity on this decision. The president and I would not have moved forward unless we had complete confidence that we were acting lawfully, in the national interest, and in the best traditions of our military.”

Specifically, the process complied with the National Defense Authorization Act of 2014 by determining that the risk the detainees posed to the United States, American citizens and U.S. interests was substantially mitigated and that the transfer was in the national security interests of the United States, Hagel said, and the recovery fulfilled the U.S. commitment to recover all military personnel held captive.

“We followed the precedent of past wartime prisoner exchanges, a practice in our country that dates back to the Revolutionary War and has occurred in most wars America has fought,” Hagel said.

Bergdahl was not a hostage, but a detained combatant being held by an enemy force, he noted. That being the case, it “was fully consistent with our long-standing policy not to offer concessions to hostage takers,” the secretary said. “The Taliban is our enemy, and we are engaged in an armed conflict with them.”

The effort was consistent with previous congressional briefings, “reflecting our intent to conduct a transfer of this nature with these particular five individuals,” Hagel said.

The administration was supposed to provide 30 days advance notice to Congress before transferring any individuals held at Guantanamo, but Hagel said the circumstances required quick action.

“Under these exceptional circumstances — a fleeting opportunity to protect the life of an American service member held captive and in danger — the national security team and the president agreed that we needed to act swiftly,” he said. “In consultation with the Department of Justice, the administration concluded that the transfer of the five could lawfully proceed.”