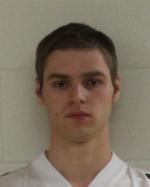 Anthony Junnell Rolfes, age 26, pled guilty on May 12 to first offense violation of the Iowa sex offender registry. Rolfes was sentenced to one year in jail (all but 14 days suspended), placed on two years probation, fined and assessed $1,065 in court costs and fines.

Rolfes was convicted in Mitchell county in 2011 on a charge of assault with intent to commit sexual abuse. The victim was a female, age 13 or younger.