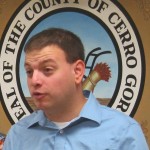 DES MOINES — Progress Iowa today released a new television advertisement, asking Iowans to call Governor Branstad and tell him to come clean about what he knew regarding his administration’s recent scandals. Click here to watch the ad: http://youtu.be/2gIRIWCsK18.

A recent survey conducted by Public Policy Polling indicated that only 17% of Iowans believe the Governor’s claims that he had no knowledge of these activities in his administration.

“The Governor’s constant denials just aren’t credible,” said Matt Sinovic, executive director of Progress Iowa. “Scandal after scandal occurs in his administration, and the Governor follows the same pattern every time. First he claims he was the last to know. Then he points the finger at his employees, his political opponents, and anyone else he can to deflect the blame. With his track record of failed leadership and denial after denial, it’s no wonder that so few of his constituents believe his claims. The Governor needs to come clean and be honest with Iowans about what he knew and when he knew it.”

The 30 second advertisement will air on CBS, NBC, and ABC affiliates during the evening news in the Des Moines and Waterloo/Cedar Rapids media markets, as well as in online ads across the state.