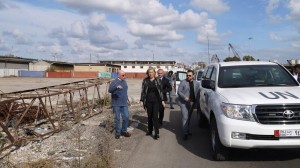 Special Coordinator of the Joint Mission of the OPCW and the UN Sigrid Kaag (second left) inspecting preparations for the elemination of chemical weapons at the Syrian Port of Latakia in December 2013. Photo: OPCW-UN Joint Mission

NIT – Nearly eight per cent of Syria’s declared chemical weapons material remains on its territory and should be removed in the shortest possible timeframe, despite the difficult security situation, the head of the Joint Mission of the Organization for the Prohibition of Chemical Weapons and the United Nations today urged.

Briefing journalists in Damascus, the Special Coordinator of the Joint Mission, Sigrid Kaag, called on Syrian partners to complete the removal of the remaining chemical weapons material.

“It is the Joint Mission’s hope and expectation that – having come this close to meeting the target date for the removal of chemicals weapons material – the Syrian Arab Republic will take the final step very soon,” Ms. Kaag said referring to today’s deadline for the Government to remove its declared stockpile of chemical weapons material.

The Joint Mission has said 92.5 per cent of the programme has been removed or destroyed in-country, including all declared production, mixing and filling equipment and munitions, as well as some buildings associated with its Chemical Weapons Programme.

She added that every effort must be made to achieve the 30 June 2014 deadline set by OPCW Executive Council Decisions and the UN Security Council, by which time the full arsenal is to be destroyed.

A team from the OPCW Technical Secretariat has been working with Syrian officials “to obtain clarifications, and address discrepancies and anomalies” and has reported “fruitful discussions and tangible progress”, Ms. Kaag added.

Twelve chemical weapons production facilities are under review by the OPCW Executive Council in The Hague regarding the modalities for their destruction.

The removal of the most critical material for destruction began in early January, in line with an agreement brokered by Russia and the United States under which Syria renounced its chemical weapons material and joined 1992 Convention on the Prohibition of the Development, Production, Stockpiling and Use of Chemical Weapons.

In addition to the removal operations, the Syrian authorities have destroyed buildings, equipment and empty mustard gas containers, and decontaminated other containers in a number of chemical weapons storage and production sites.

Turning to allegations in recent weeks of toxic chlorine gas attacks in several parts of the country, Ms. Kaag urged that all necessary steps be taken to establish the facts surrounding these “unsubstantiated allegations”.

“I understand that the OPCW Technical Secretariat has been in touch with the Syrian government in this regard,” she said, adding that since Syria is now a party to the Chemical Weapons Convention, the OPCW is the appropriate body to assess these allegations. The OPCW’s probe of these incidents would be conducted outside of the Joint Mission mandate.