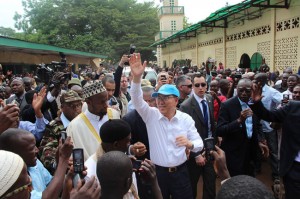 Secretary-General Ban Ki-moon visited the Central African Republic on 5 April to shine a light on the crisis in the country. He met both with internally displaced people and representatives of the National Transitional Council. UN Photo/Evan Schneider/BINUCA/Samir Afridi

Unanimously adopting a new resolution, the Council authorized the mandate of the UN Multidimensional Integrated Stabilisation Mission in CAR (MINUSCA) through 30 April 2015.

The new mission will take over the responsibilities of the African-led International Support Mission, known as MISCA, and, as from 15 September 2014, will initially comprise up to 10,000 military personnel, including 240 military observers and 200 staff officers, as well as 1,800 police personnel, including 1,400 formed police unit personnel and 400 individual police officers, and 20 corrections officers.

Further, the Council requests Secretary-General Ban Ki-moon to incorporate the presence of the UN Integrated Peacebuilding Office in the Central African Republic (BINUCA) into MINUSCA as of today and to ensure “a seamless transition” from one entity to the other.

Welcoming the establishment of the new Mission, Mr. Ban underscored that the Council’s action “will lead to the immediate, concrete and sustainable support that the Central African people need and deserve.

In a statement issued by his spokesperson in New York, the UN chief called once again for an immediate end to the killings, targeted attacks and other atrocious human rights violations that continue with total impunity.

He commended the tireless efforts of MISCA, which, he said, will continue to implement its mandate until 15 September, alongside French forces known as Sangaris, and the recently authorized European Union Force in the Central African Republic, EUFOR.

“The United Nations will work closely with MISCA to ensure a seamless transition to MINUSCA,” said the statement, which included a strong call by the Secretary-General on all partners to increase their support to MISCA until MINUSCA becomes fully operational.

The Secretary-General recognized the important role of the Economic Community of Central African States (ECCAS), the African Union, and the Mediation led by the Republic of Congo in support of the political transition in the Central African Republic.

“This is the moment for the international community to demonstrate its collective support to the efforts undertaken by the Transitional Government, under the leadership of Catherine Samba-Panza, to bring long-lasting peace, stability and reconciliation to the Central African Republic,” said Mr. Ban.

The statement goes on to expresses the UN chief’s deep appreciation for the committed and courageous work of all UN personnel in the CAR and, in particular, for the exemplary dedication of his Special Representative Babacar Gaye and the rest of the staff of the Integrated Peacebuilding Office in the Central African Republic, BINUCA.

Mr. Ban paid a visit to the CAR this past weekend to focus the world’s attention on a crisis that has been marked by widespread atrocities and suffering, and to call on the country’s citizens to heed the lessons of neighbouring Rwanda and stop the violence.

The UN chief’s visit came amid a recent escalation in fighting in the CAR capital, Bangui, between Christians and Muslims. The crisis, which began in December 2012, has left thousands of people dead, and 2.2 million, about half the population of CAR, in need of humanitarian aid. More than 650,000 people are still internally displaced, and over 290,000 have fled to neighbouring countries in search of refuge.