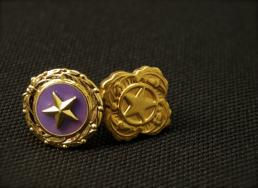 The gold star has officially been recognized as a symbol of loss since 1918.

“I am honored to be able to wear [the lapel button], but it is also a good and bad thing because everyone that is authorized to wear the Gold Star Lapel Button has a loved one who paid the ultimate sacrifice, protecting our freedom while in harm’s way,” said Kenneth. “The good is that it’s another way that they can honor and pay respects to their fallen loved one.”

AR 607-1, which took effect March 31, authorizes Soldiers like Kenneth who have lost an immediate family member in combat to wear the Gold Star Lapel Button on the Army service and dress uniforms. The regulation defines an immediate family member as a spouse, mother, father, stepparent, child, stepchild, sister, stepsister, brother, stepbrother or a person in loco parentis [acting in place of a parent].

“Many people I have talked to about my brother all had the same thing to say, he was a Soldier’s Soldier,” said Kenneth. “He stood up for his beliefs and he stood up for his fellow comrades. His true passion in life was to be a Soldier. It fit him so well.”

Jon Stiles, a native of Battlesville, Okla., enlisted in the Marine Corps in 1991. He served for approximately 13 years in the Corps as a U.S. assault amphibian repairman before re-enlisting in the Colorado National Guard, where he served on the state honor guard.

“He was the first mentor that I had,” said Kenneth. “He wouldn’t sugarcoat anything I asked advice on, no matter how brutal the question or problem I had.”

Jon volunteered for chemical operations duty in support of Operation Enduring Freedom in May of 2008 and was assigned to the 927th Engineer Company (Sapper), 769th Engineer Battalion, Louisiana Army National Guard, and was stationed in Jalalabad, Afghanistan.

In October of 2008, Kenneth said his stepbrother helped rescue three injured Soldiers from a burning vehicle when a suicide bomber attacked their convoy. Jon suffered injuries to his vocal cords and lungs during that rescue, but declined medical leave and returned to his team early.

Jon was killed Nov. 13, 2008, when an improvised explosive device blew up near his vehicle in Jalalabad. He was 38.

“After his death, I was at a loss,” said Ken. “Nothing I did was filling the mentorship or guidance I was desperately looking for until I started to coach swimming. Still, that wasn’t enough. Then I thought the best way to honor him was to enlist into the Army.”

Kenneth attended basic training at Fort Knox, Ky.; Defense Information School at Fort George C. Meade in Maryland; and in the winter of 2010 deployed in support of Operation Enduring Freedom as a combat camera documentation specialist. Since 2013 he has served as a multimedia illustrator in the Office of the Administrative Assistant to the Army, Army Multimedia and Visual Information Directorate of Army Graphics at the Pentagon.

“The biggest way I can honor and pay tribute to my brother and everyone that has paid the ultimate sacrifice is by wearing the uniform proudly every day,” he said.