Another Cold War? Many Americans think so 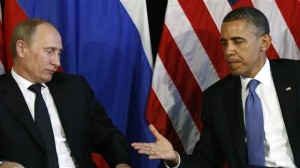 NIT – It was a four decade stalemate between East and West.  A struggle between communism and capitalism.  A tug-of-war between the forces of freedom and oppression.

The tensions of the last Cold War – which many say ended in 1993 with a victory by the Western bloc nations led by the United States over the Eastern bloc, headed by the former Soviet Union –  have faded into the rear-view mirror of history as nearly a quarter of a century has passed.  But many Americans fear that Russian aggression in Ukraine – a nation Russia dominated as a member of the now defunct Soviet Union – may be a sign of things to come: A new cold war between Russia and America.

A new poll released  by Gallup this week shows that fifty percent of Americans believe the U.S. and Russia are currently heading back toward a Cold War.  President Obama says he has no interest in another Cold War, and likely Democratic presidential challenger (and front-runner) Hillary Clinton says it’s up to the Russians whether a new period of high tensions materializes.

However, Russia has aggressively and quickly annexed the Crimean peninsula – formerly part of Ukraine – and are now massing troops along the eastern border of that nation, perhaps looking for more of that former Soviet-satelite nation.  Russian president Vladimir Putin – a former KGB agent – has not shied away from asserting Russian power and influence.  Putin and the Russians are using reasoning such as protecting Russians-speaking people as an impetus to invade.  These developments coupled with a long history of carving up sovereign nations (see Poland in 1939 and Baltic states and others after World War II) have Americans on edge.  Older Americans may remember Russia’s militaristic adventures (see: Cuba in the 1960’s and Afghanistan in the 1980’s), which could be an indication why 64% of those over the age of 65 feel a new Cold War is inevitable.  A large majority of Republicans believe a confrontation is on the horizon, as well.

Right now, the U.S. and it’s NATO allies are watching Russia closely and imposing what discipline they can (they kicked Russia out of the G8, a club of industrialized nations, and imposed sanctions on some Russian leaders) and have issued proclamations denouncing Russia’s annexation of Crimea.  The U.S. has sent a warship to the Black Sea, where all the trouble is.

What do you think?  Will Russia push the West into a new era of icy relations, high tensions, and spy versus spy?  Or did we truly ever leave that behind?

One Response to Another Cold War? Many Americans think so