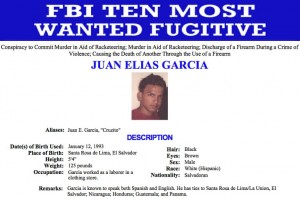 NEW YORK – The FBI’s New York Field Office is seeking the public’s assistance in locating Juan Elias Garcia. Garcia, also known as “Cruzito,” is wanted for his alleged participation in the murder of 19-year-old Vanessa Argueta and her 2-year-old son in Central Islip, New York, on February 5, 2010.

Garcia was born on January 12, 1993, in Santa Rosa de Lima, El Salvador. He is approximately 5’4” tall and 125 pounds with black hair and brown eyes. He is known to speak both English and Spanish and has ties to Santa Rosa de Lima/La Union, El Salvador; Nicaragua; Honduras; Guatemala; and Panama.

FBI Assistant Director in Charge of the New York Field Office George Venizelos said, “Garcia’s callous disregard for human life resulted in the senseless murder of a young mother and her helpless 2-year-old son. His appointment to the FBI’s Ten Most Wanted Fugitives list illustrates not only the seriousness of his crimes but our commitment to seeking justice for his victims. The FBI, along with our law enforcement partners, to include the Long Island Gang Task Force, will remain vigilant until Garcia and all criminals who hide behind violent enterprises are brought to justice.”

United States Attorney for the Eastern District of New York Loretta E. Lynch said, “Garcia and his co-conspirators executed a young mother and her toddler in cold blood before fleeing from the United States. Today’s announcement by the FBI, which designates Garcia as one of the FBI’s Ten Most Wanted suspects, recognizes both the horrific nature of this crime, as well as the tenacious efforts by the FBI and United States Attorney’s Office to locate Garcia and bring him to face to justice.” Ms. Lynch extended her grateful appreciation to each of the members of the FBI’s Long Island Gang Task Force.

According to prior court filings and testimony introduced during two recent MS-13 racketeering trials, Garcia was involved in a romantic relationship with Argueta, a woman who had ties to both the 18th Street Gang and the Latin Kings—two of MS-13’s principal rivals. After a dispute between Argueta and Garcia, rival gang members allegedly threatened violence against Garcia. When Garcia explained that he had been threatened by members of the rival gang as a result of information he believed Argueta had provided, Garcia and other MS-13 members, including Adalberto Ariel Guzman and Rene Mendez Mejia, obtained permission from their MS-13 leader, Heriberto Martinez, to retaliate against Argueta.

On February 4, 2010, Garcia contacted Argueta and invited her out to dinner. Later that evening, Garcia picked up Argueta and 2 two-year-old son, Diego Torres, in a vehicle. Garcia, Guzman, and Mejia then allegedly drove the vehicle to a wooded area in Central Islip and lured their victims into the woods. Once they were in the woods, the MS-13 members fired two shots with a .22 caliber handgun, striking Argueta twice in the head and chest. After hearing the gunshots and seeing his mother killed, Torres began crying. The defendants shot Torres in the head, which knocked the young boy to the ground but did not kill him. Torres got back up and clutched onto Garcia’s leg, but Guzman then fired a second shot that struck Torres in the head and killed him. On February 5, 2010, the bodies of Argueta and her son were found in a wooded area in Central Islip.

In early 2010, Mejia, Guzman, and Garcia were identified as the shooters in the Argueta and Torres murders. Mejia pled guilty to the murders, while Guzman was found guilty by a jury of his peers. Both are awaiting sentencing for their crimes. Martinez, the fourth defendant charged in connection with the murders of Argueta and Torres and other criminal activity, has been sentenced to three terms of life in prison, plus 60 years.

As of March 26, 2014, Garcia remains a fugitive. The FBI is offering a reward of up to $100,000 for any information leading directly to the arrest of Juan Elias Garcia. Individuals with information concerning Garcia should take no action themselves but instead immediately contact the nearest FBI office or local law enforcement agency. For any possible sightings outside the United States, contact the nearest U.S. Embassy or Consulate.

Garcia is the 501st person to be placed on the FBI’s Ten Most Wanted Fugitives list, which was established in March 1950.