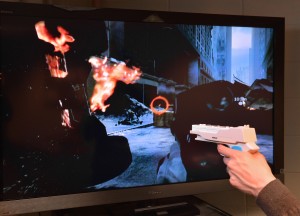 AMES – Children who repeatedly play violent video games are learning thought patterns that will stick with them and influence behaviors as they grow older, according to a new study by Iowa State University researchers. The effect is the same regardless of age, gender or culture. Douglas Gentile, an associate professor of psychology and lead author of the study published in JAMA Pediatrics, says it is really no different than learning math or to play the piano.

“If you practice over and over, you have that knowledge in your head. The fact that you haven’t played the piano in years doesn’t mean you can’t still sit down and play something,” Gentile said. “It’s the same with violent games – you practice being vigilant for enemies, practice thinking that it’s acceptable to respond aggressively to provocation, and practice becoming desensitized to the consequences of violence.”

Researchers found that over time children start to think more aggressively. And when provoked at home, school or in other situations, children will react much like they do when playing a violent video game. Repeated practice of aggressive ways of thinking appears to drive the long-term effect of violent games on aggression.

“Violent video games model physical aggression,” said Craig Anderson, Distinguished Professor of psychology and director of the Center for the Study of Violence at Iowa State and co-author of the report. “They also reward players for being alert to hostile intentions and for using aggressive behavior to solve conflicts. Practicing such aggressive thinking in these games improves the ability of the players to think aggressively. In turn, this habitual aggressive thinking increases their aggressiveness in real life.”

The study followed more than 3,000 children in third, fourth, seventh and eighth grades for three years. Researchers collected data each year to track the amount of time spent playing video games, the violent content of the game and changes in a child’s behavior. The length and size of the study made it possible for researchers to detect and test even small effects.

Boys reported doing more physically aggressive behaviors and spending more time playing violent games than girls. However, even when researchers controlled for gender, the violent video game effects on behavior were the same for girls and boys.

To test whether violent games had a greater effect on children who were more aggressive, researchers compared children with high and low levels of aggression. Much like gender, they did not find a significant difference in terms of the effect from violent games.

“The results make a pretty strong argument that gender and age really don’t affect this relationship between video game play, aggressive thinking and aggressive behavior,” said Sara Prot, a graduate student in psychology at Iowa State. “There are lasting effects on thinking and behavior. You can’t say one group, because of their gender, age or culture, is protected from the effects in some special way.”

More than 90 percent of children and teens play video games, and researchers say the majority of those games contain some type of violent content. However, that does not mean all games are bad and that children will only develop bad habits. These latest results build upon a previous study, published in Psychological Science, that analyzed the influence of prosocial media.

That earlier cross-cultural study, led by Prot, Gentile and Anderson, found that prosocial media – video games, movies or TV shows that portray helpful, caring and cooperative behaviors – positively influence behavior regardless of culture. The study, the first of its kind, tested levels of empathy and helpfulness of thousands of children and adolescents in seven countries. In combination, these studies show that the content of the video games youth play – prosocial or antisocial – determines their impact on real world behavior.