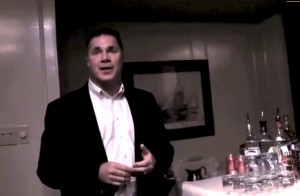 NIT – Iowa Democratic Congressman and candidate for US Senate Bruce Braley ripped Senator Charles Grassley in a newly-released video for being a farmer without enough education.

The video, taken at an undisclosed time and location but posted to Youtube Tuesday, shows Braley, U.S. Representative for Iowa’s 1st congressional district, standing next to a table littered with bottles of booze, dismissing Republican Senator Chuck Grassley as “a farmer from Iowa who never went to law school”.

Braley was expounding on his fear that Grassley could become the next chair of the Senate Judiciary Committee.

Braley said that not only did Grassley never go to law school, but he also never “practiced law”.

Grassley is the ranking member of the Senate Judiciary Committee currently, and is serving his sixth term in Congress. He is known as an outspoken watchdog of government.