SAN ANTONIO – Iowa State beat North Carolina on a last-second shot by DeAndre Kane in a third round NCAA game today in San Antonio to advance to the Sweet 16 for the first time since 2000.

Kane had the ball in his hands in the final 10 seconds, attacked the basket and lifted a floater that found its way home. Kane finished the game with 22 points, 10 rebounds and 7 assists. 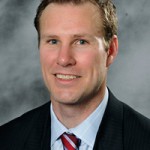 “It was a crazy last couple of minutes,” Coach Fred Hoiberg said.  “A little nerve-wracking there at the end.  We’re looking forward to going to New York.”

Iowa State trailed by as many as 8 points with under 5 minutes to go, but never gave up as sophomore guard Naz Long made several big three pointers.  The Cyclones were able to finish the game on a 17-6 run.

The Cyclones had to do it without one of their toughest and most-reliable players, George Niang, who suffered a broken foot in the Cyclones’ second round win over North Carolina Central.

Former Iowan Marcus Paige led North Carolina with 19 points, but tried to call a timeout as time expired.  The refs ruled the game over.

Next up for Iowa State is UConn, which beat Villanova. That game will be played Friday in Madison Square Garden in New York.