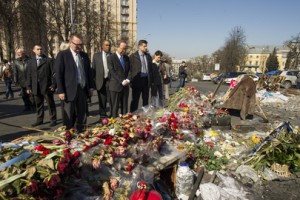 Secretary-General Ban Ki-moon (centre) pays his respects at a makeshift memorial for the victims of the recent violence in Kyiv. UN Photo/Eskinder Debebe

KYIV – Secretary-General Ban Ki-moon on Saturday reiterated his message that only a diplomatic solution, based on the ideals of the United Nations Charter, would solve the current crisis between Russia and Ukraine.

In a meeting in Kyiv with Ukraine’s Prime Minister, Arseniy Yatsenyuk, Mr. Ban added that a direct dialogue between the two neighbours is critical to reducing the ongoing tensions.

The UN chief was in Russia on Thursday and arrived in Ukraine on Friday as part of his efforts to help de-escalate tensions between Moscow and Kyiv.

Months of political unrest in Ukraine led to the removal by Parliament of President Viktor Yanukovych in February, followed by increased tensions in the country’s autonomous region of Crimea, where additional Russian military were recently deployed and a secession referendum was held last week.

Throughout the crisis, the Secretary-General and senior UN officials have consistently called for a solution that is guided by the principles of the UN Charter and that respects Ukraine’s unity, sovereignty and territorial integrity.

During his meeting today, Mr. Ban briefed the Prime Minister on his recent meeting with Russian leaders, including President Vladimir Putin and Foreign Minister Sergey Lavrov, according to a readout provided by Mr. Ban’s spokesperson.

He also commended the Prime Minister for his recent speech in which he called for an inclusive political process in Ukraine.