Statement by President Obama on Ukraine

MASON CITY – President Barack Obama released the following statement Tuesday on the situation in Ukraine and Russian aggression there: 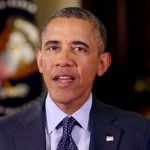 THE PRESIDENT: Good morning, everybody. In recent months, as the citizens of Ukraine have made their voices heard, we have been guided by a fundamental principle — the future of Ukraine must be decided by the people of Ukraine. That means Ukraine’s sovereignty and territorial integrity must be respected, and international law must be upheld.

And so, Russia’s decision to send troops into Crimea has rightly drawn global condemnation. From the start, the United States has mobilized the international community in support of Ukraine to isolate Russia for its actions and to reassure our allies and partners. We saw this international unity again over the weekend, when Russia stood alone in the U.N. Security Council defending its actions in Crimea. And as I told President Putin yesterday, the referendum in Crimea was a clear violation of Ukrainian constitutions and international law, and it will not be recognized by the international community.

Today, I’m announcing a series of measures that will continue to increase the cost on Russia and on those responsible for what is happening in Ukraine. First, as authorized by the executive order I signed two weeks ago, we are imposing sanctions on specific individuals responsible for undermining the sovereignty, territorial integrity and government of Ukraine. We’re making it clear that there are consequences for their actions.

Second, I have signed a new executive order that expands the scope of our sanctions. As an initial step, I’m authorizing sanctions on Russian officials — entities operating in the arms sector in Russia and individuals who provide material support to senior officials of the Russian government. And if Russia continues to interfere in Ukraine, we stand ready to impose further sanctions.

Third, we’re continuing our close consultations with our European partners, who today in Brussels moved ahead with their own sanctions against Russia. Tonight, Vice President Biden departs for Europe, where he will meet with the leaders of our NATO allies — Poland, Estonia, Latvia and Lithuania. And I’ll be traveling to Europe next week. Our message will be clear. As NATO allies, we have a solemn commitment to our collective defense, and we will uphold this commitment.

Fourth, we’ll continue to make clear to Russia that further provocations will achieve nothing except to further isolate Russia and diminish its place in the world. The international community will continue to stand together to oppose any violations of Ukrainian sovereignty and territorial integrity, and continued Russian military intervention in Ukraine will only deepen Russia’s diplomatic isolation and exact a greater toll on the Russian economy.

Going forward, we can calibrate our response based on whether Russia chooses to escalate or to de-escalate the situation. Now, I believe there’s still a path to resolve this situation diplomatically in a way that addresses the interest of both Russia and Ukraine. That includes Russia pulling its forces in Crimea back to their bases, supporting the deployment of additional international monitors in Ukraine, and engaging in dialogue with the Ukrainian government, which has indicated its openness to pursuing constitutional reform as they move forward towards elections this spring.

But throughout this process, we’re going to stand firm in our unwavering support for Ukraine. As I told Prime Minister Yatsenyuk last week, the United States stands with the people of Ukraine and their right to determine their own destiny. We’re going to keep working with Congress and our international partners to offer Ukraine the economic support that it needs to weather this crisis and to improve the daily lives of the Ukrainian people.

And as we go forward, we’ll continue to look at the range of ways we can help our Ukrainian friends achieve their universal rights and the security, prosperity and dignity that they deserve. Thanks very much. And Jay, I think, will be available for questions. Thank you.

President Obama today issued a new Executive Order (E.O.) under the national emergency with respect to Ukraine that finds that the actions and policies of the Russian government with respect to Ukraine -– including through the deployment of Russian military forces in the Crimea region of Ukraine –- undermine democratic processes and institutions in Ukraine; threaten its peace, security, stability, sovereignty, and territorial integrity; and contribute to the misappropriation of its assets.

This new authority expands upon E.O. 13660, which the President signed less than two weeks ago, by authorizing the Secretary of the Treasury, in consultation with the Secretary of State, to impose sanctions on named officials of the Russian government, any individual or entity that operates in the Russian arms industry, and any designated individual or entity that acts on behalf of, or that provides material or other support to, any senior Russian government official. We have fashioned these sanctions to impose costs on named individuals who wield influence in the Russian government and those responsible for the deteriorating situation in Ukraine. We stand ready to use these authorities in a direct and targeted fashion as events warrant.

In response to the Russian government’s actions contributing to the crisis in Ukraine, this new E.O. lists seven Russian government officials who are being designated for sanctions. These individuals are Vladislav Surkov, Sergey Glazyev, Leonid Slutsky, Andrei Klishas, Valentina Matviyenko, Dmitry Rogozin, and Yelena Mizulina.

The United States also will seek to hold accountable individuals who use their resources or influence to support or act on behalf of senior Russian government officials. We recognize that the Russian leadership derives significant support from, and takes action through, individuals who do not themselves serve in any official capacity. Our current focus is to identify these individuals and target their personal assets, but not companies that they may manage on behalf of the Russian state.

In addition to the new E.O., the Treasury Department today has imposed sanctions on four other individuals under E.O. 13660, issued on March 6, for their actions or policies that threaten the peace, security, stability, sovereignty, or territorial integrity of Ukraine and in undermining the Government of Ukraine. They are Crimea-based separatist leaders Sergey Aksyonov and Vladimir Konstantinov; former Ukrainian presidential chief of staff Viktor Medvedchuk; and former President of Ukraine Viktor Yanukovych.

Today’s actions send a strong message to the Russian government that there are consequences for their actions that violate the sovereignty and territorial integrity of Ukraine, including their actions supporting the illegal referendum for Crimean separation. The United States, together with international partners, will continue to stand by the Ukrainian government to ensure that costs are imposed on Crimean separatists and their Russian backers. Today’s actions also serve as notice to Russia that unless it abides by its international obligations and returns its military forces to their original bases and respects Ukraine’s sovereignty and territorial integrity, the United States is prepared to take additional steps to impose further political and economic costs.