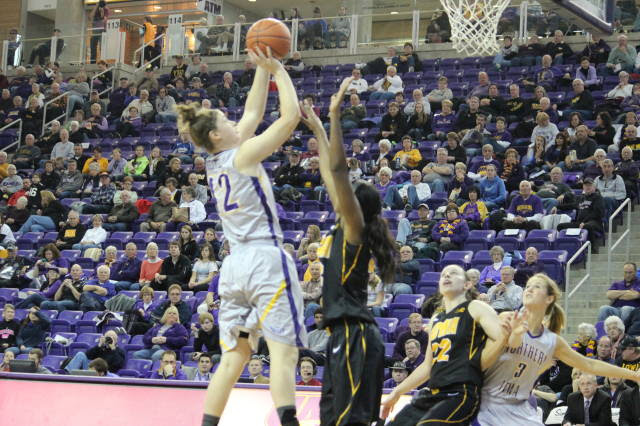 ST. CHARLES, Mo. – The University of Northern Iowa women’s basketball team were edged by the Illinois State Redbirds in a battle to the last second, falling 65-63 in the first game of the MVC Tournament.

The Panthers and the Redbirds headed into the first media timeout tied 7-7. Illinois State jumped out to a quick lead, but Keitel was able to convert on her signature turnaround jumper to even the score at the 16:16 mark in the first half.

The score remained tied with 10:24 left in the half with each team scoring 15 points with eight of the Panthers first fifteen points being score in the paint. Illinois State then went on a 7-0 run on UNI, extending their lead to 22-15 after a three-pointer from Alexis Foley sparked the run.

UNI battled back to within two points of the Redbirds with Brown scoring a turnaround jumper of her own. She followed it up with a huge three-pointer from the corner to give UNI a 25-24 lead with 4:25 on the clock.

The two three-pointers sparked a 10-0 run for UNI, giving them a 30-24 lead with 2:45 remaining in the half. The Panthers headed into halftime with a 35-28 lead on the Redbirds, holding Illinois State to just two field goals in the final three minutes of the half.

Keitel opened the second half by scoring the Panthers’ first four points, giving UNI a 39-32 lead. Illinois State answered with a 6-0 run to cut UNI’s lead to a point with 14:46 left to play in the game.

Illinois State took their first lead of the second half at the 10:20 mark after Foley knocked in two free throws to make the score 42-41. The Redbirds held the lead till the 4:41 mark when Madison Weekly knocked down a key three-pointer to give UNI a 55-54 advantage.

The two teams traded leads heading into the final three minutes of the game with Illinois State taking a 58-57 lead off a bank shot with 1:56 remaining in the game. Brown and Weekly both beat the Redbirds on the dribble to score in the paint, tying the score 63-63 with 29 seconds to play.

Illinois State’s Chloe Nelson was then able to hit a jump shot with 15 seconds left in the game to give Illinois State a 65-63 lead and eventually the win over the Panthers.