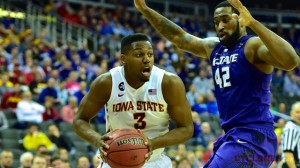 The game had everything. A total of 11 ties and eight lead changes occurred and the pace at the end was frenetic. Long made a pair of free-throws with 0:16 seconds left and then capped the game with a lay-in in the final seconds to seal the victory. The win was ISU’s 24th this season, tying for the third-best season victory total in school history.

Long scored nine points in the final 2:47 in the game, including a huge trey which gave the Cyclones the lead for good at the 2:47 mark.

Kansas State got off to a hot start, making 6-of-8 from the field and 3-of-3 from downtown while forging an early 17-11 lead.

Iowa State added to its lead when Monte Morris converted two steals into a pair of easy fast-break buckets to help the Cyclones go ahead 44-36 with under two minutes left in the half. However, KSU scored the last five points of the first period, capped off by a Marcus Foster trey in the closing seconds.

Foster had 16 first-half points for the Wildcats.

KSU shot 55.2 percent from the field in the first half, but ISU neutralized the Wildcats hot shooting by forcing nine turnovers and scoring 11 points off of them.

The Wildcats kept their hot shooting going in the second half, moving ahead 64-61 with 9:43 left in the game. ISU then scored five-straight points behind an Ejim trey to retake the lead at 66-64.

Moments later Georges Niang joined DeAndre Kane on the bench with four fouls at the 9:00 mark of the second period.

The game went through four ties and four lead changes in the next six minutes. ISU went ahead 76-72 on an Ejim drive to the hoop with 5:02 left in the game. However, KSU tied the score at 76-76 moments later after Kane fouled out with 3:55 left in the game.