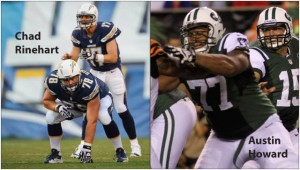 A pair of former University of Northern Iowa Panther football players have signed free agent agreements with teams in the National Football League.

“I’m excited to be back,” said Rinehart. “All through the process, I was hoping the Chargers and I could come to an agreement. This past season was the most enjoyable of my six-year career. I would like to thank Tom (Telesco), Mike (McCoy) and Dean (Spanos) for having me back.”

In his first season in San Diego, the 6-5,321-pounder established himself as a vital cog in a Bolts offensive line that was vastly improved in 2013. With Rinehart entrenched at guard, the Chargers allowed just 30 sacks for the year, tied for fourth fewest in the NFL. As a result, Philip Rivers, and the Bolts had the fourth best passing attack in the regular season, averaging 270.5 yards per game through the air. On the ground, Rinehart helped pave the way for a career season for Ryan Mathews, who ran for a personal best 1,255 yards. Overall, the Chargers ranked 13th in the NFL in rushing, averaging 122.8 yards per game.

Rinehart suffered a foot injury in a Week 3 loss to the Tennessee Titans, forcing him to miss five games and six starts during the middle of the season. Including the postseason, he started nine games at left guard and three at right guard, with the team going 7-5 over that span.

Initially a third-round pick of the Washington Redskins in 2008 out of Northern Iowa, he previously spent three seasons with the Buffalo Bills before landing in San Diego. Upon signing with the Chargers, Rinehart was reunited with offensive line coach Joe D’Alessandris, who held the same position in Buffalo during his time there. Rinehart credited his familiarity with D’Alessandris for allowing him to hit the ground running in his first season with the Bolts.