Shoot, or not? Police officers forced to make “split second decision” between toy and real gun

OMAHA – To shoot or not to shoot.

That was the question that faced an Omaha police officer when he spotted a young male walking down a street carrying a rifle, which the male refused to drop.

Omaha police described a situation late last month where officers responded a report of a black male, 18-20 years of age in a black hoodie, walking down a residential street carrying a rifle.

Omaha police officers Brendan O’Flynn and Chris Groth responded to the call. The ensuing incident then unfolded, as described by Omaha police: 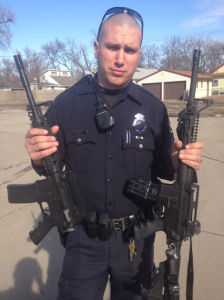 Officer O’Flynn observes a black male in a puffy coat carrying a black assault rifle in front of a gas station. Officer O’Flynn jumps out of his cruiser and with his gun aimed at the suspect, yells for him to drop the gun. The man holding the gun switches the gun to the other hand. Again Officer O’Flynn commands the suspect to put down the gun.What is the outcome of this story? At this point Officer O’Flynn has every reason to believe the suspect may shoot at him or some other innocent victim. He has a split second to make a decision.

Thankfully for all involved the suspect drops the gun. It is at that point when the gun hits the pavement, that Officer O’Flynn hears the rattle of the gun and realizes that it is not a high powered rifle but a bb gun. The suspect carrying the realistic looking rifle is 14 years old and tells Officer O’Flynn he purposely colored the “toy identifying” orange cap black so the gun would look more realistic.

This story has so many other possible outcomes. What if this young boy would have pointed the gun at a car load of gang members? What if he had walked into a store with an armed owner? What if he didn’t drop the weapon and Officer O’Flynn was forced to use deadly force on a 14-year-old? Just recently a 13-year-old boy was killed by Santa Rosa officers when he was also told to put down the assault rifle. Unfortunately, he chose to ignore the command and turned towards the officers. He didn’t survive.

So back to the outcome of this story, when speaking with the officers, the suspect showed no remorse or concern for what had just happened. When his mother appeared on scene she destroyed the gun, so that makes one less altered toy gun off the street. Make no mistake though, this post isn’t about gun control, it is about bad choices that have the potential for a deadly outcome.

This young man is lucky. He is lucky that he put the gun down when he did. He is lucky to have a concerned mother in his life. He is very lucky to be alive. If you had to decide if the gun was real would you be able to make that decision?

9 Responses to Shoot, or not? Police officers forced to make “split second decision” between toy and real gun