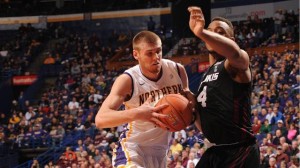 ST. LOUIS, Mo. – The University of Northern Iowa men’s basketball team charged all the way back from a 19-point second-half deficit to pull even with Southern Illinois before the Salukis were able to hang on for a 63-58 MVC Tournament quarterfinal win at the Scottrade Center.

UNI (16-15 overall) was led by junior Seth Tuttle’s 15-point, 17-rebound performance. Tuttle also added three assists, four blocks and a steal to his stat line. Junior Nate Buss was the only other Panther to reach double figures in scoring with 10 points.

Southern Illinois (14-18 overall) saw Desmar Jackson go for a game-high 23 points and he added 11 rebounds for a double-double. Jackson scored 20 of his 23 points in the first half. Anthony Beane contribued with 16 points and seven rebounds. Jackson tallied a game-high six steals for the Salukis.

UNI scored the first six points of the second half as Tuttle and Wes Washpun added a pair of fast break dunks before SIU head coach Barry Hinson called timeout with 18:07 left in the game.

SIU’s Davante Drinkard scored on a putback with 6:18 remaining to give SIU a 52-41 lead. UNI would then hold SIU scoreless until the 2:56 mark.

UNI scored 11 straight points to tie the game at 52-52, with Tuttle clsoing the run with a pair of free throws with 3:32 on the clock. SIU’s Bola Olaniyan scored on a jumper in the paint and added a free throw to put SIU back on top, 55-52. Tuttle and Washpun would miss shots in the lane on the Panthers’s next two possessions and SIU’s Beane made a pair of free throws to push the margin back to five at 57-52 with 1:51 left.

Buss scored on an offensive putback with 1:19 left and Washpun tallied a layup with 48 seconds left to pull UNI to within 58-56. On the ensuing inbounds play, SIU threw the ball the length of the floor and Jackson was able to save the pass from going out of bounds and found Beane for a layup with 44 seconds left to score a key bucket. The Salukis then closed out the 63-58 win to advance to play Indiana State in Saturday’s semifinal.