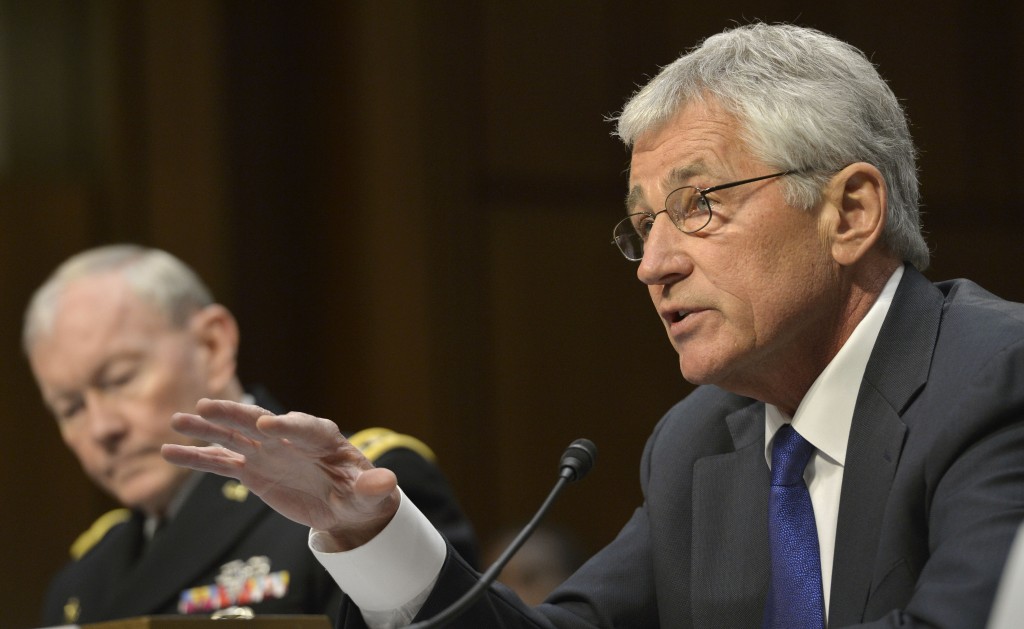 The secretary testified with Chairman of the Joint Chiefs of Staff Army Gen. Martin E. Dempsey this morning before the Senate Armed Services Committee on the president’s fiscal year 2015 budget request.

The abrupt and severe budget cuts known as sequestration would result in “a military that could not fulfill its defense strategy, putting at risk America’s traditional role as guarantor of global security and, ultimately, our own security,” Hagel told the panel.

The president’s defense budget is responsible, balanced and realistic, he said, supporting the U.S. defense strategy, defending the nation and keeping Defense Department’s compensation and training commitments to its people.

Hagel called the defense budget far more than a set of numbers or a list of decisions.

“It is a statement of values and priorities,” the secretary said. “It is a budget grounded in reality … that prepares the U.S. military to defend our national security in a world that is becoming less predictable, more volatile and, in some ways, more threatening to our country and our interests.”

The department’s fiscal 2015 base budget request is about $496 billion and includes an extra $26 billion, a proposal called the president’s Opportunity Growth and Security Initiative that DOD would use next year to improve readiness and modernization.

“That $26 billion represents an effort that would help dig us back out of the hole that we have been in for the last two years on readiness, and particularly focused on modernization,” Hagel said.

And the president’s five-year plan offers what the secretary called a realistic alternative to sequestration, projecting $115 billion more than the current law allows.

DOD requires the added funding to implement its updated defense strategy as outlined in the 2014 Quadrennial Defense Review, a study by the department undertaken every four years that analyzes strategic objectives and potential military threats.

“The strategic priorities articulated in the QDR represent America’s highest security interests — defending the homeland, building security globally, deterring aggression and being ready and capable to win decisively against the adversary,” Hagel said.

In December, the Bipartisan Budget Act passed by Congress gave the department temporary relief from sequestration and a year of budget certainty, Hagel said, but it still imposes more than $75 billion in cuts over the next two years. Unless Congress changes the law, sequestration will cut another $50 billion from the budget beginning in fiscal 2016.

“Even though we are requesting spending levels above sequestration, we have maintained flexibility in our budget to respond immediately to the lower topline should sequestration be reimposed,” the secretary said, noting that this was done by reprogramming some of the sequestration-level force-structure reductions that take longer to plan and implement, such as the decommissioning of the aircraft carrier USS George Washington.

Hagel also issued formal guidance to the service leadership that these reductions will not be made if Congress indicates it will make future appropriations at topline levels in the five-year plan.

Addressing for the panel critical issues in the budget request, Hagel said that to meet national security needs under a constrained budget the department focused on the balance among readiness, capability and capacity.

“After more than a decade of large stability operations, we traded some capacity to protect the readiness and modernization capabilities as we shift the focus on future requirements. These are shaped by enduring and emerging threats. We have to be able to defeat terrorist threats and deter adversaries with increasingly modern weapons and technological capabilities,” he said.

“We must also assure that America’s economic interests are protected through open sea lanes, freedom of the skies and space, and deal with one of the most urgent and real threats facing all nations – cyberattacks,” the secretary added. “That’s why we protected funding for cyber and special operations forces.”

For the active-duty Army, the department proposed drawing down to 440,000 or 450,000 soldiers, less than 10 percent below its size before the attacks of 9/11. And the department will continue investing in high-end ground capabilities to keep its soldiers the most advanced on earth, Hagel said.

Army National Guard and Army Reserve units will draw down by 5 percent, and the Army’s helicopter force structure will be reduced by 8 percent. The active Army’s helicopter fleet will be cut by 25 percent while keeping the aircraft modernized as the fleet moves from seven models to four.

The decisions, including the department’s recommendation to trade out Apaches in the Army National Guard for Black Hawks were driven by strategic evaluations, Hagel added.

The Navy will take 11 ships out of its operational inventory, and these will be modernized and returned to service with greater capability and longer lifespans, he said.

The Marine Corps will continue its planned drawdown to 182,000, but will devote 900 more Marines to increased embassy security. Hagel said the Marine Corps will remain ready and postured for crisis response as it moves back to its expeditionary, amphibious roots.

The Air Force will retire the A-10, replacing it with more modern sophisticated multi-mission aircraft such as the joint strike fighter, he said.

On compensation reform, Hagel said, under a restricted budget the department needs modest adjustments to the growth in pay and benefits, and the savings will be reinvested in training and equipping the troops. There are no proposals to change military retirement in this budget, he added.

The department will continue to recommend pay increases, the secretary said, but they won’t be as substantial as in past years. The Defense Department will continue subsidizing off-base housing costs, he added, but at 95 percent rather than 100 percent, and the decrease will be phased in over the next several years.

The department will not close commissaries, Hagel said, but it recommends gradually phasing out some subsidies for domestic commissaries that are not in remote locations. And the department recommends simplifying and modernizing its three TRICARE health care plan systems. It will do this by merging them into one system, with modest increases in copays and deductibles that encourage using the most affordable means of care.

“Active duty personnel will still receive health care that is entirely free,” the secretary said. “This will be more effective and more efficient and will let us focus more on quality. Overall, everyone’s benefits will remain substantial, affordable and generous, as they should be.”

The fiscal 2015 proposed defense budget will allow the military to meet America’s future challenges and threats, he said, and it matches resources to strategy.

“As we end our second war of the last decade, our longest ever, this budget adapts and adjusts to new strategic realities and fiscal constraints while preparing for the future,” Hagel told the panel.

“This is not a business-as usual-presentation,” he added. “It is a budget that begins to make the hard choices that will have to be made. The longer we defer these difficult decisions, the more risk we will have down the road, and the next DOD leaders and Congress will have to face more complicated and difficult choices.”