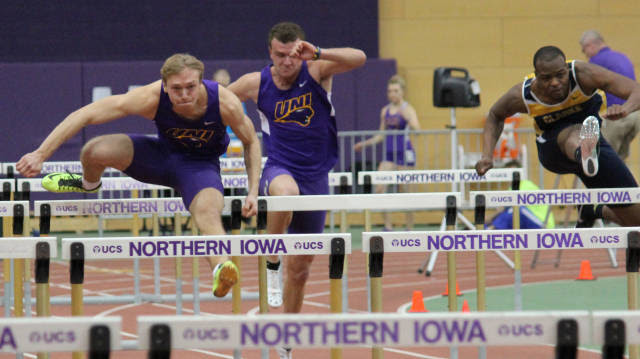 CEDAR FALLS, Iowa – The University of Northern Iowa track and field program is set to host the 2014 Missouri Valley Conference Indoor Track and Field Championships, inside the UNI-Dome March 1-2. This weekend marks the 14th time that UNI has hosted the Indoor Championships.

Tickets will be sold at the UNI-Dome for $6 for adults and $3 for youth. The meet will also feature a live stream on Sunday from noon until the completion of the meet on www.unipanthers.com. Results will be available at the end of each day’s competition at www.unipanthers.com and www.mvc-sports.com.

The Panthers will have a total of 58 student-athletes competing during the two-day event, including several fresh faces that will be contending for points at the MVC Indoor Championships for the first time.

Fourteen out of the 32 men entered to compete for UNI are true freshman while eight of the 26 Panther women entries are newcomers as well.

Leading the newcomers is Brandon Carnes. The Bradenton, Fla. native has held the fastest time in the men’s 60 meter dash in the MVC the entire indoor season. He has run a personal-best time of 6.81 three times this season. The freshman is also ranked first in the 200 meters with his personal record time of 21.50.

The Panthers will also be returning five all-conference honorees from the 2013 MVC Indoor Championships. UNI won two individual championships on the men’s side with Carlos Anderson coming away victorious in the men’s 60 meter dash and Jordan Guske winning the 200 meters.

Libby Torresani will look to improve her MVC standing at this year’s championships after placing third last season. The junior from Middleton, Wis. has broken the UNI indoor pole vault record twice this season. Her personal-best height of 13-02.25 was set at the Iowa State Classic, breaking her previous record of 13-01.50 that was set earlier in the season.

Paige Knodle has been headlining for the Panther women on the track and in the field this season after redshirting last indoor season. Knodle is ranked first in the MVC in the pentathlon and will look to earn all-conference honors after posting a personal-best 3,903 point finish in the multi-event at the Jack Jennett Invitational. The point total placed her third all-time at UNI.

UNI currently has seven women and seven men ranked in the top-five in their respective categories with several of those athletes excelling at one or more events. Knodle (Pentathlon), Carnes (60, 200 meters) and Weston Riesselman (Long Jump) are all leading the conference in their events.

Alex Wilson is tied for third in the MVC in the 800 meters and ranks fourth in the mile after a standout season in the middle-distance races for the Panther women. She set a new personal-best time of 4:53.35 in the mile at the Jack Johnson Invite, placing her second all-time at UNI.

Riesselman, a sophomore jumper from Boone, Iowa, sprung onto the MVC track and field scene this season with his huge leap at the Jack Jennett Invite that landed him first in the conference. His personal-best jump of 24-04.25 also ties him for fourth all-time at UNI in the long jump.

Also included in those UNI athletes ranked highly in the MVC is all-conference returner Justin Baker. He finished in third place in the shot put at last year’s championships and is ranked fourth in the MVC with his personal-best throw of 59-09.75. The throw earned him second all-time at UNI.