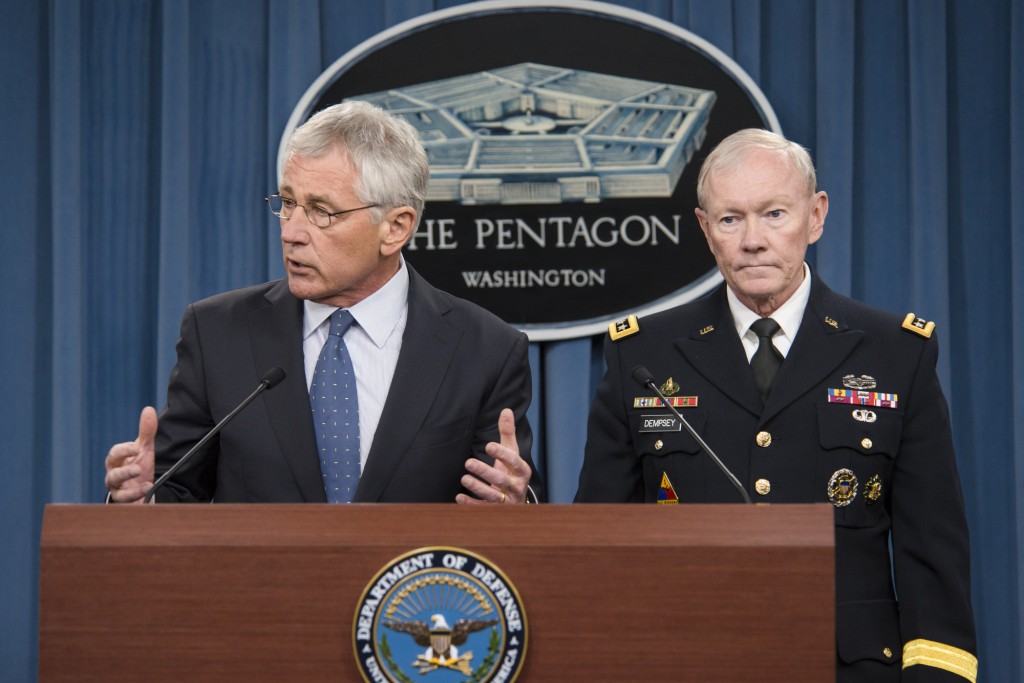 WASHINGTON, Feb. 24, 2014 – The Defense Department can no longer put off slowing the growth of military personnel costs, and the fiscal year 2015 budget request DOD is recommending to the president begins that process, defense leaders said here today.

Saying they are ready to take on the hard task of curbing growth in compensation, Defense Secretary Chuck Hagel and Army Gen. Martin E. Dempsey, the chairman of the Joint Chiefs of Staff, previewed the fiscal 2015 budget request for reporters.

Hagel said all defense leaders agreed to a holistic and comprehensive approach to compensation changes. “Continuous piecemeal changes will only magnify uncertainty and doubts among our service members about whether promised benefits will be there in the future,” he said.

Dempsey also stressed this in his remarks. “I know this weighs heavily on the minds of our men and women in uniform and on their families,” he said. “Our force is extraordinarily accepting of change. They are less understanding of piecemeal approaches. They want — and they deserve — predictability.”

Military and civilian compensation accounts for 50 percent of the DOD budget. This has put the department out of balance, the defense leaders said, and the department must invest to ensure service members are well-equipped and well-trained to handle future challenges.

All savings from compensation reforms will help keep service members properly trained and equipped, they added. The budget request recommends a 1 percent increase in military pay, and it freezes pay for general and flag officers.

Hagel and Dempsey stressed that no one in uniform will see a pay cut. Rather, they explained, the push is to slow growth to put pay and benefits on a more sustainable path. “Total pay and benefits increased 40 percent faster than the private sector between 2001 and 2012, and while that was the right thing to do at the time, we can’t continue at that rate over the long term,” Hagel said.

In addition to pay, the budget request begins the process to slow the growth rate of tax-free basic housing allowances. This will continue for five years until the allowances cover about 95 percent of the average service member’s housing expenses. Again, no one will see a decrease in their basic house allowance, Hagel said. DOD also would no longer reimburse service members for renter’s insurance.

This change will happen slowly, so that no one’s housing allowances will actually go down, Hagel said, noting that the process also will consider differences in the relative cost of living, so service members in high-rent areas won’t be adversely affected.

Under the request, the department will not shut down any commissaries, but will cut subsidies for some of them, the secretary said.

“Over three years, we will reduce by $1 billion the annual direct subsidy provided to military commissaries, which now totals $1.4 billion,” he said. “We are not shutting down commissaries. All commissaries will still get free rent and pay no taxes. They will be able to continue to provide a very good deal to service members and retirees — much like our post exchanges, which do not receive direct subsidies. Overseas commissaries and those in remote locations will continue receiving direct subsidies.”

DOD will simplify and modernize the TRICARE health insurance program by consolidating plans and adjusting deductibles and co-pays in ways that encourage members to use the most affordable means of care — such as military treatment facilities, preferred providers, and generic prescriptions, the secretary said.

“We will ask retirees and some active-duty family members to pay a little more in their deductibles and co-pays, but their benefits will remain affordable, as they should be,” he said. “To protect the most vulnerable, under this plan medically retired service members, their families, and the survivors of service members who die on active duty would not pay the annual participation fees charged to other retirees, and would pay a smaller share of the costs for health care than other retirees.”

Under the budget recommendation, the average military retiree would go from paying 8 percent of health care costs out of pocket to paying 11 percent. Retirees old enough to use Medicare and who choose to have TRICARE as well, eventually would be asked to pay a little bit more to enroll in TRICARE, Hagel said.

The approach encourages retirees to use free military facilities if they are close to home, which provide outstanding care and are often underused, the secretary said.

The compensation proposals do not recommend any changes to the military retirement benefits for those now in the services, Hagel said.

“We are awaiting the results of the Military Compensation and Retirement Modernization Commission, which is expected to present its report in February 2015, before pursuing reforms in this area,” he added. “But DOD continues to support the principle of ‘grandfathering’ for any future changes to military retirement plans.”

Hagel said the proposals were carefully crafted to reform military compensation in a fair, responsible, and sustainable way.

“We recognize that no one serving our nation in uniform is overpaid for what they do for our country,” he added. “But if we continue on the current course without making these modest adjustments now, the choices will only grow more difficult and painful down the road. We will inevitably have to either cut into compensation even more deeply and abruptly, or we will have to deprive our men and women of the training and equipment they need to succeed in battle. Either way, we would be breaking faith with our people. And the president and I will not allow that to happen.”