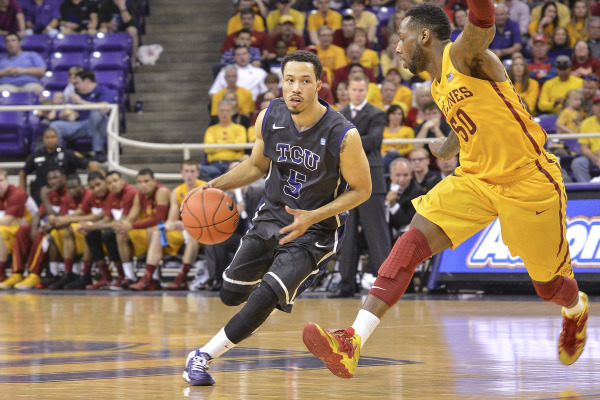 FORT WORTH, Texas – No. 17 Iowa State got its best shot from TCU Saturday at Daniel-Meyer Coliseum, but the Cyclones were eventually able to pull away from the Horned Frogs, 71-60. The win improved ISU to 21-5 overall, 9-5 in Big 12 play. TCU fell to 9-17 overall, 0-14 in conference competition.

Up 32-30 at the half, Iowa State saw TCU pull ahead, but the Cyclones always kept the Horned Frogs at arm’s length, with TCU’s biggest lead of the second half only getting to three points. After a Karviar Shepherd lay-in gave the Frogs a 47-44 lead, the Cyclones went to work on a 6-0 run to take a 50-47 lead with about 12 minutes left.

TCU was able to get a bucket through their star guard Kyan Anderson, but Iowa State got two straight buckets from Melvin Ejim and a score from DeAndre Kane to post its largest lead of the game, 56-50.

While Iowa State was not able to establish a big run to get away from TCU, what the Cyclones were able to do was match the Frogs when they began to apply pressure to the lead. Iowa State was finally able to put the game out of the reach of TCU when Georges Niang drove, converted and drew a foul on Sheperd. Then ensuing free throw put Iowa State ahead 64-57.

Iowa State got into an early 13-3 hole, due in part to the Big 12’s leading scorer, Melvin Ejim, picking up two early offensive fouls. The Cyclones built their way back into the game and with the Horned Frogs’ lead reduced to 17-15, head coach Fred Hoiberg decided to bring his star forward back into the game after a six minute rest.

Ejim responded by scoring six straight points, capped off with a dunk that tied the game at 21-21. The Frogs were able to re-take their lead, but the Cyclones finally found their way in front as Naz Long drove baseline and kicked cross-court to Matt Thomas for a corner 3-pointer that put ISU ahead 26-23.

The Cyclones ensured they would take the lead at the half as Georges Niang set a high screen for Morris and peeled into the open post where Morris found Niang for the easy lay-in and the 32-30 halftime lead.