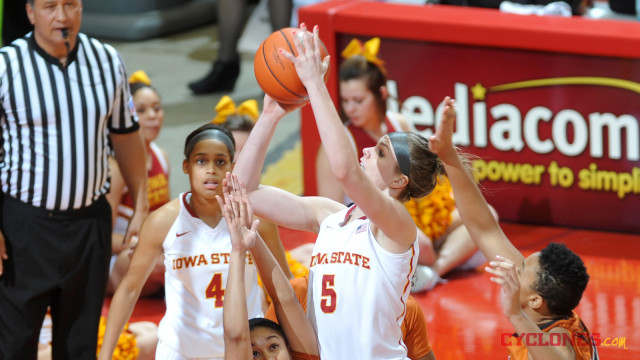 The Cyclones started off slow as the Longhorns went on a 7-0 run to kick things off. The Cyclone offense would kick in after a turnover by UT’s Brady Sanders led to a 3-pointer by Jadda Buckley. Iowa State would then go on a 12-0 run to lead the Longhorns 12-7, holding the lead for the remainder of the first half.

In total, the Cyclones would capitalize on nine Longhorn turnovers with 15 Iowa State points in the first half.

In the second half, the Cyclones and Longhorns would go back-and-forth until the 7:02 mark, when Iowa State started out on a 13-0 run to give Iowa State a 64-51 lead. The highlight came at the tail end of the run, when Nikki Moody stole the inbounds pass for a layin and an and-one. The Cyclones would hang on to win 81-64.

Iowa State has hit a three pointer in an NCAA record 607 consecutive games.

Tonight’s crowd of 13,187 was the seventh-largest in Iowa State history and the largest since 2004.

Iowa State hits the road to take on Oklahoma State on Wednesday, Feb. 26. The Big 12 showdown is slated to tip off at 7 p.m. CT.