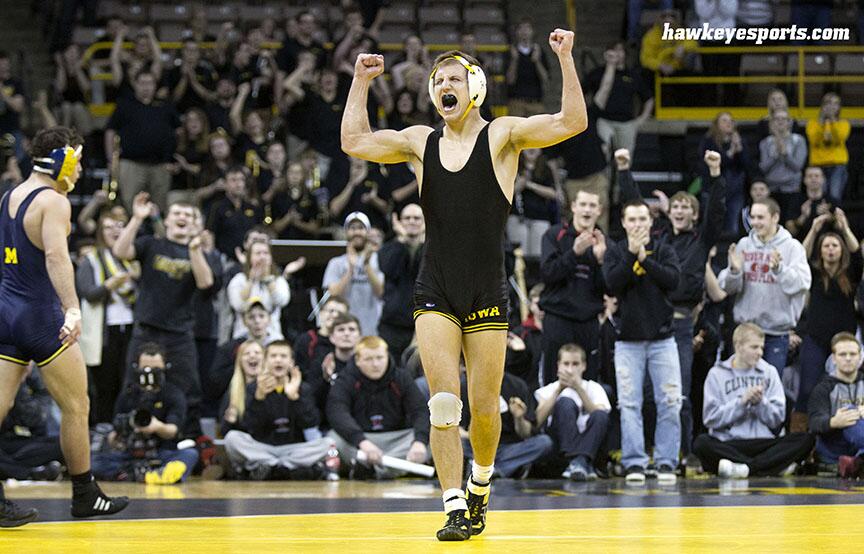 IOWA CITY – Seniors Tony Ramos and Derek St. John exited Mediacom Mat as winners for the final time Sunday afternoon, leading No. 3 Iowa to a 26-6 win over No. 11 Michigan inside Carver-Hawkeye Arena.

St. John finished his career with a 31-1 mark inside Carver-Hawkeye Arena, and Ramos had his hand raised for the 34th time in 34 career matches on his home turf.

Ramos said getting the win today was exciting, but also a bit of a relief.

“It’s not something I was trying to think about all week long, but people keep asking about it,” said Ramos, who is ranked No. 3 at 133. “To me I was trying not to make it a big thing, but it is a big thing. The last person to (go undefeated at home) four years was Tom (Brands), and three years was (Brent) Metcalf. Those are big shoes to fill and that’s a good class of people to be in.”

Brands was undefeated at Carver-Hawkeye Arena from 1989-92. He credits Ramos for showing up to win every time and giving the fans something to look forward to.

Eight Hawkeyes got the job done against Wolverines (10-4, 6-2), who entered the dual one-half match ahead of Iowa in the conference standings. Seven Hawkeyes won by decision, Mike Evans won by tech. fall, and the Hawkeyes owned a 17-3 advantage in takedowns.

Evans used three takedowns and eight nearfall points to defeat Collin Zeerip, 16-0, at 174. It was his team-best sixth technical fall of the year, and it was among a string of six consecutive wins for Iowa.

No. 12 Brody Grothus started Iowa’s stretch with a 17-14 win against No. 7 Eric Grajales at 149. Grothus trailed 9-5 after one period, but used a reversal and two nearfall to tie the match, 9-9, in the second. After two more nearfall points, an exchange of reversals, and a late takedown, the match was sent to overtime tied, 14-14. In the first tiebreak, Grothus used two back points and an escape to earn his fourth win over a top 10 opponent.

“Coach always says, `score a lot of points,'” said Grothus. “I did a lot of good things, but I also did a lot of bad things. You take away the positive, and I found a way to win… scoring a lot of points. I think that’s what makes wrestling exciting.”

St. John followed Grothus with a win at 157 to give Iowa a 12-3 lead at intermission.

Michigan’s No. 13 Steve Dutton used a third period takedown to defeat No. 9 Josh Dziewa at 141, and — after the second tiebreak period — No. 2 Adam Coon used a six-second advantage in riding time to defeat No. 3 Bobby Telford at 285.

The Hawkeyes improved to 13-2 overall, 6-1 in the conference. With a win Feb. 23 at No. 15 Wisconsin, Iowa has a chance to share the Big Ten regular season title with Minnesota and Penn State.

#Hawkeyes Tony Ramos waves to the fans after beating Michigan's Rossi Bruno in his last match in Carver-Hawkeye Arena pic.twitter.com/KkC3NarddF