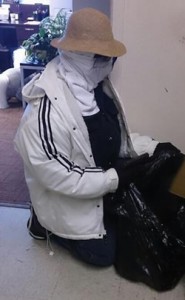 These criminals have been dubbed the Trash Talking Bandits because of their verbally abusive and aggressive demeanor while committing this bank robbery.

Wells Fargo Bank is offering a reward up to $35,000 for information leading to the identification, arrest, and prosecution of these bank robbers.

If anyone has any information on this bank robbery, please call the FBI Rocky Mountain Safe Streets Task Force at 303-435-7787.

The individuals responsible for this violent bank robbery used handguns to intimidate and terrify both victim employees and bank customers alike; they placed the barrel of a gun to the heads of bank employees.

The two suspects are considered armed and dangerous. investigators are not ruling out the possibility of other individuals being involved.

Law enforcement is particularly concerned with the level of violence used by these criminals and the possibility of them acting again, resulting in serious injury to an innocent person.

Investigators are asking for the public’s assistance in identifying these individuals. For investigative purposes, we will not disclose the actual amount taken, but it is significant. The amount of money taken in this bank robbery is the largest in recent Colorado history.

If someone has been seen with large amounts of cash or has changed their spending habits in a manner that would be cause for concern, please notify law enforcement.

While a number of factors are considered by judges for sentencing, the potential sentence for this federal offense ranges from 25 years to life in prison.